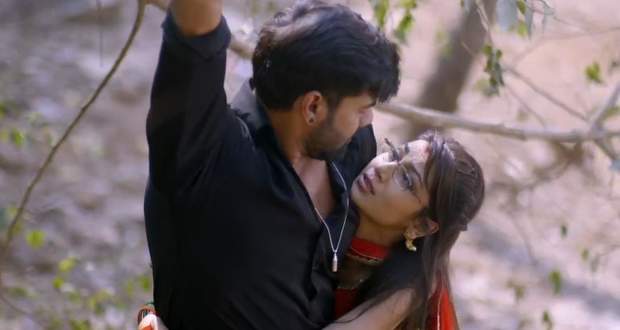 Pragya tells him not to apologize while Bittu gets angry and gives a hard push from his jeep to the car.

The car falls down from the cliff meanwhile Pragya and Abhi manage to get off the car.

Bittu starts to celebrate but instantly finds that they are still hanging on the tree.

Bittu starts cutting the tree and they both fall from the cliff. As they fall off the cliff, Bittu calls Digvijay and informs them that they both are dead.

Digvijay reaches the cliff's location and tells Bittu to get the proof of their death. He even offers him double payment if he gets the picture of their dead body.

Abhi is not dead he recalls his promise given to Pragya and wakes up.

Pragya who is unconscious listens to his words and gains her consciousness.

While they both are trying to find a way out of the forest, some goons appear and fight with them.

Meanwhile, Pragya takes a promise from Abhi not to fight and moves on to escape from them.

As they are escaping, they find Purab’s car passing by but they are helpless. They are unable to take his help because goons are following them.

After wandering in the forest Pragya feels thirsty Abhi finds a lake nearby and they both go to have some water.