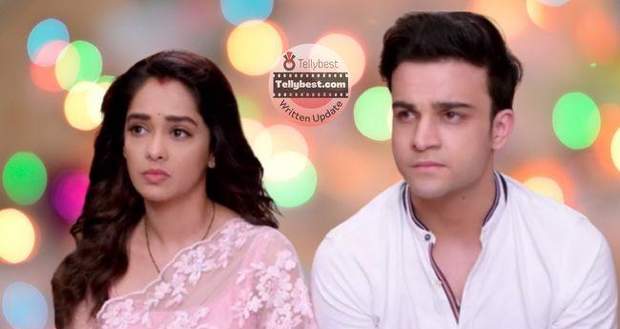 Today's Kumkum Bhagya 16th January 2023 episode starts with Prachi telling Ranbir that her water has broken and it is time for the baby to come.

Ranbir starts panicking and asks everyone what he should do in a shaky voice.

Dida asks Ranbir to pick up Prachi in his arms and run to the hospital as soon as possible.

Ranbir picks up Prachi in his arms and starts the car to go to the hospital after which the other family members also follow them.

On their way, Ranbir makes a painful expression watching Prachi while Prachi asks him to concentrate on driving as labor pain is gonna take place.

Ranbir concentrates on driving but the car stops midway, leaving Ranbir and Prachi in utter panic and confusion.

Prachi asks Ranbir to do something after which Ranbir comes out of the car and looks for a lift.

Luckily, Rhea comes to their rescue and helps Ranbir transfer Prachi to her car so they can take her to the hospital.

As Prachi asks Rhea why she did not come to the party, Rhea replies that she was supposed to meet Alia as she is being transferred to the central jail.

Meanwhile, Alia is on her way to the central jail in the police van with the lady constable taunting her of her loneliness.

Suddenly, the van goes over a few bumps on the road making the constable lose her balance for a moment in which Alia snatches her gun.

Alia points the gun at the lady constable and asks the inspector to stop the van if he wants the constable alive.

The inspector stops the car after which Alia asks him to leave or else, she will shoot the constable.

After the inspector leaves from there, Alia asks the lady constable about her statement when Alia came to the prison and she later shoots her in her leg.

Alia says that she will return to Prachi and Ranbir’s lives to destroy everything as they sent her to jail.

At the same time, Ranbir and Rhea reach the hospital with Prachi and admit her to prepare for delivery.

Ranbir gets scolded by Prachi as he insists on going inside and asks the doctor to take care of Prachi as he loves her dearly.

Rhea leaves to see off Alia for the last time and asks Ranbir to take care of her sister.

The other family members reach the hospital and ask Ranbir how everything is going when they hear the cry of a child from inside.

Ranbir starts dancing along with Pallavi, Dida, Aryan, and Sahana as he realizes that he has become a dad and that too of a baby girl.

Ranbir gets permission to meet Prachi and their baby while Dida, Pallavi, and others go to the guest room to celebrate.

Ranbir plants a kiss on Prachi’s forehead and takes his daughter in his arms for the first time.

Prachi and Ranbir call their baby girl by the name “Panchi” and say that she has brought all moons and stars into their lives.

On the other hand, Alia gets to know that Prachi has been admitted to the hospital due to labor by coming to the Kohli residence.

The doctor checks Prachi while Ranbir says that he will be back in a minute after placing their daughter back in the cot.

Alia enters the hospital and almost gets caught by Sahana and Alia while she disguises herself as a nurse after knocking out the real one.

Alia hears that Prachi has given birth to a girl child and smirks evilly as she has come to destroy everything.

© Copyright tellybest.com, 2022, 2023. All Rights Reserved. Unauthorized use and/or duplication of any material from tellybest.com without written permission is strictly prohibited.
Cached Saved on: Wednesday 25th of January 2023 05:35:09 PMCached Disp on: Wednesday 1st of February 2023 07:05:17 PM