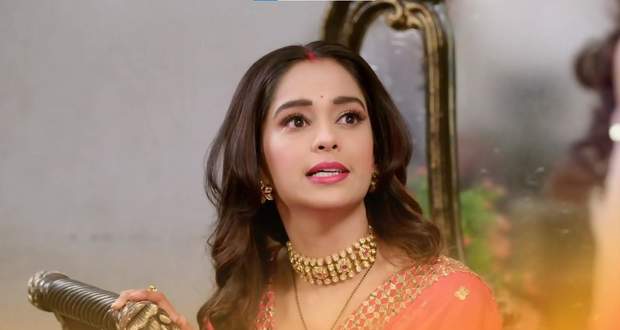 Prachi does not answer Ranbir and continues to pack her clothes in a suitcase.

Taking out the clothes from the suitcase, Ranbir throws away the bag and tells Prachi that she is not leaving anywhere.

Prachi brings another suitcase but Ranbir throws it away too and lays on the clothes to prevent Prachi from packing her stuff.

As Ranbir asks the reason for Prachi leaving, Prachi tells Ranbir that he is trying to erase her memories from their old home which she adores to date.

Ranbir gets surprised on hearing Prachi and asks her to wait for a few more hours while assuring her that he will turn everything to its right place.

After Prachi leaves the room brimming with anger, Stanley comes to Ranbir and asks him to find any other way to take Rhea’s signatures on the papers.

Meanwhile, Sahana drags Rhea away along with her after she spots her eavesdropping on Prachi and Ranbir.

Sahana tells that Rhea hurts others to make herself happy and is very insecure regarding life issues.

However, Rhea laughs at Sahana and asks her to wait till midnight to know how much Ranbir loves her.

Ranbir makes a new plan to get Rhea’s signatures in which he will try to drug her with juice and give Stanley another pill as a backup.

Later, at the party, Dida comes to Prachi and comforts her on seeing her standing alone.

On seeing Dida cough, Prachi goes to Ranbir and tries to take the juice from him but he refuses to give it and rushes to Rhea to offer her a drink.

Rhea refuses the drink and instead drags Ranbir for a dance together.

In the middle of the dance, Ranbir pulls Prachi into his arms as she was about to leave and dances passionately with her.

The whole family engages in a fun-filled performance after which Ranbir takes Rhea to the corner and offers her the juice.

Prachi gets jealous of seeing Ranbir constantly acting so lovey-dovey with Rhea.

© Copyright tellybest.com, 2020, 2021. All Rights Reserved. Unauthorized use and/or duplication of any material from tellybest.com without written permission is strictly prohibited.
Cached Saved on: Monday 3rd of October 2022 02:50:11 AMCached Disp on: Wednesday 5th of October 2022 04:53:28 PM