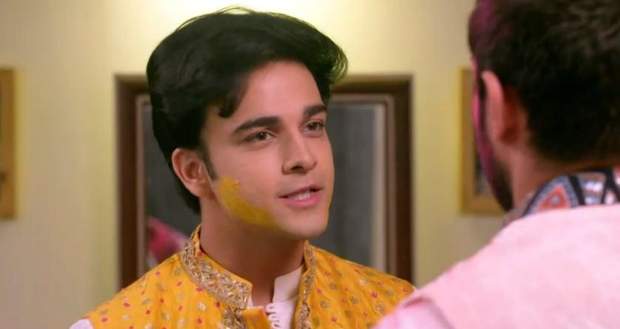 As Balwinder runs away from there, Lakshmi comes to Prachi to check if she is okay and rushes after Balwinder to catch him.

Prachi tries to stop Lakshmi but pauses in her steps feeling dizzy due to the nervousness.

Lakshmi was about to catch Balwinder and his men when they get saved by Rhea and Aaliyah who bring them into the room.

Accusing Balwinder of their failure, Rhea and Aaliyah insult him and make him angry by the plan of harming Lakshmi.

Triggered by Aaliyah’s attitude and behavior, Balwinder takes her at his knifepoint and tells Rhea that he can kill Aaliyah in an instant.

After Sahana gets to know about the accident, she and Lakshmi take Prachi to the room while being suspicious of Rhea.

Sahana tells Lakshmi about the evilness of Rhea and how she always hurts Prachi to gain Ranbeer.

As Lakshmi shares her family’s story with Prachi and Sahana, the three of them get emotional and share a hug.

Meanwhile, Balwinder releases Aaliyah after she apologizes half-heartedly and asks them to help him find Lakshmi.

Malishka appears and agrees to offer her help to Balwinder.

Ranbeer comes to talk to Prachi but Prachi refuses at first, after Lakshmi requests her, Prachi agrees to give Ranbeer a chance.

Ranbeer asks the reason why Prachi is acting so cold to him and leaves after telling Prachi not to hate him.

On the other hand, Balwinder chases Lakshmi after she discovers his presence at the party.

Getting Lakshmi in his clutches, Balwinder forces her to come closer to him and leave the party.

However, Prachi and Sahana arrive at the correct moment and save Lakshmi somehow.

As Balwinder puts a knife in Lakshmi’s throat, Rishi appears on Sahana’s call and tries to stop him.

With Ranbeer kicking away the knife from Balwinder’s hand, Rishi and Ranbeer beat up Balwinder and his men.

However, with the help of Malishka, Balwinder escapes from there, after warning Lakshmi.