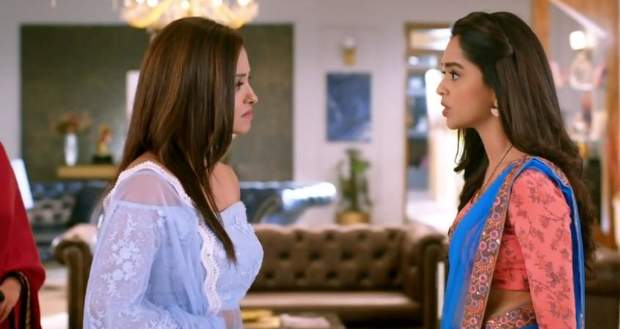 Today's Kumkum Bhagya 16th May 2022 episode starts with Prachi announcing that Rhea has to apologize to her as she has found Rhea’s mangal sutra in her room.

Rhea straightaway refuses to apologize to Prachi as she will never bow down to her.

However, Pallavi asks Rhea to apologize to Prachi as she blamed her without being sure of her own carelessness.

Rhea clenches her teeth in anger and says sorry to Prachi while Sahana and Dida relish the feeling to their heart’s content.

After Rhea, Alia, and Pallavi storm out of the living room, Ranbir and Prachi walk in their own ways without giving each other a second glance.

Meanwhile, Rhea throws a tantrum about being insulted in front of everyone which makes Alia promise her that she will avenge her.

Alia tells Rhea that they have to shatter Prachi’s belief in marriage so that she can never look at herself with pride in her eyes.

Sahana tries to convince Prachi to rethink her relationship with Ranbir but gets shunned for intervening in Prachi’s decisions.

Later, Ranbir walks through the corridor with his suitcase making Pallavi question where he is going.

Ranbir answers that he is going to Bangalore to attend a conference so that he can live in peace for some time.

Meanwhile, Prachi suddenly feels uncomfortable and anxious and decides to go to the temple to calm herself.

As she was about to leave, Vikram and Pallavi storm into the living room with Vikram announcing that Ranbir has left the house.

Pallavi does not believe Vikram and argues with him when he says that it is because of Pallavi that Ranbir has left the house.

Later, on her way to the temple, Prachi talks with Ranbir shortly and feels relieved after knowing that he is alright.