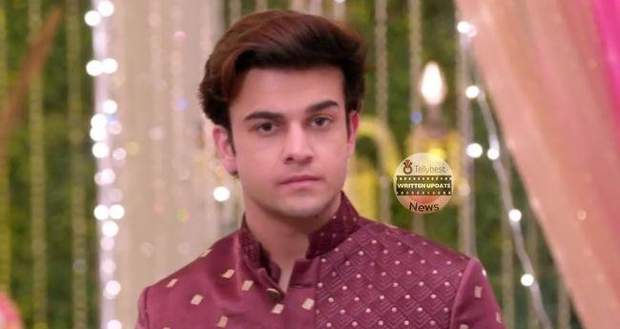 Today's Kumkum Bhagya 16th November 2022 episode starts with Prachi stopping Alia from behind and asking her what she is trying so hard to hide from the entire family.

Alia tells Prachi that she should learn some manners as people should not stop one from behind when they are walking.

Prachi says that she knows the truth about Rhea’s pregnancy and it is not of any use to hide the reports from her.

Alia maintains a straight face and asks Prachi what she knows about Rhea’s pregnancy.

Prachi says that Rhea is not pregnant in reality and she has seen many things that indicate so.

Alia brushes Prachi off as a joke but gets silent when Prachi tells her that Dr. Preeti will send the original reports to her soon.

Meanwhile, Rhea fails to call Alia and the goons turn against her.

Rhea tries to run away but the goons catch her and take her with them along with Mihika and the waiter.

Sahana witnesses the situation and gets confused as to why Rhea’s men are attacking her but follows them to save Mihika.

The goons arrive at a warehouse and meet their superior with Rhea, Mihika, and the waiter.

One of the goons proposes that they sell Rhea along with Mihika and get the 15 lacs they need.

Rhea squeals in impatience and tells the goons that she can give them 10 lacs as they remove the cloth from her mouth.

The goons agree and take her with them to the ATM to get the money.

Sahana calls Prachi after she fails to contact Aryan or Ranbir and informs her about the place and the situation.

Prachi leaves the house with Ranbir in urgency to save Mihika from being sold by the goons.

Meanwhile, Aryan gets impatient after not being able to find Sahana anywhere in the hotel.

Aryan starts to give a vivid description of Sahana to the receptionist and describes Sahana as a girl whom you cannot help but fell in love with.

After succeeding in tracking Sahana through his phone, Aryan proceeds to leave but Millie refuses to go as she knows that Aryan loves Sahana.

At the same time, Ranbir and Prachi reach the location and silently head toward the warehouse.

Ranbir loses focus on their mission as he gets closer to Prachi and reminds himself that they are not in a situation to make love.

Rhea expresses sympathy toward Mihika and leaves the warehouse after handing money to the goons.

© Copyright tellybest.com, 2022, 2023. All Rights Reserved. Unauthorized use and/or duplication of any material from tellybest.com without written permission is strictly prohibited.
Cached Saved on: Monday 21st of November 2022 01:07:20 AMCached Disp on: Saturday 10th of December 2022 02:39:28 PM