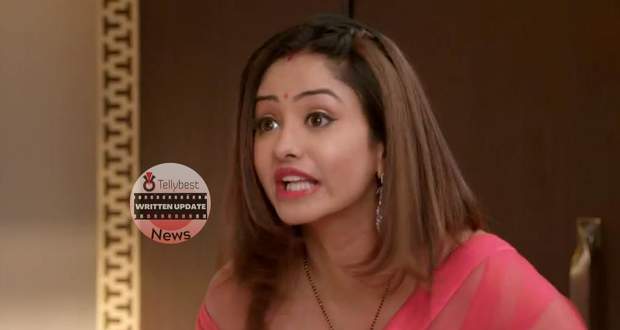 Today's Kumkum Bhagya 16th September 2022 episode starts with Prachi slightly bumping into Ranbir and Ranbir calling her rude for that.

Prachi says that she behaves accordingly to the other person and it may seem rude to Ranbir because he has not seen the world.

After Prachi leaves, Ranbir exclaims to Vikram about her behavior who points out how Ranbir himself was behaving.

Panditji calls everyone for the puja and everyone gathers in front of the Ganesh idol.

Just then, Rahul and the other goons appear together and block their view of Ganpati’s idol.

Vikram asks them if they are still searching for the exit and they reply by pulling Dida toward them and putting a knife at her throat.

Everyone gets shocked to see knives and guns in the hands of the goons and freezes at their spots with fear.

Vikram tries to call the police but gets caught by the goons who start to take away the phones of everyone.

Ranbir refuses to give his phone, making the goon point the gun at his head in anger.

The goon begins to count up to three while asking Ranbir to pass his phone but Ranbir does not budge a bit.

Prachi snatches his phone and gives it to them at the last moment.

Meanwhile, Dida starts to say that the knife hurts her, but Rahul does not let her go.

Prachi comes forward and slaps Rahul as he refuses to let go of Dida.

As one of the goons walks toward Prachi to capture her, he slips on the water on the floor and crashes with Rahul, making Dida free.

Everyone runs away while Ranbir and Prachi both start to beat up the goons.

Ranbir sees a goon pointing their gun toward Prachi and runs away with her while he adjusts his target.

However, Pallavi and Vikram fail to escape from there and get stuck with some other guests.

Ranbir and Prachi start bickering as Ranbir asks Prachi why she was trying to be such a macho woman.

Prachi calls Ranbir stupid because he stopped her from fighting with the goons.

Elsewhere, Alia and Rhea blame each other as they both ignored Mihika’s warning and laughed at her.

Siddharth comes and reminds them how they made fun of Mihika but Alia and Rhea look down on him.

As Alia goes away to check on the goons, Siddharth loses his cool and chokes Rhea by pushing her against the wall.

Alia comes back and pulls Siddharth away from Rhea after which both Rhea and Alia kick him harshly.

Dida and Aryan hide away when Aryan takes out his spare mobile to call the police.

However, he discovers that the mobile is dead and gets scolded by Dida for playing games every time.

Prachi, Ranbir, and Sahana team up after finding a gun in the goon’s bag and a white powder.

On their way, Ranbir tries to silence Prachi by putting his hand over her mouth but Prachi bites it.

After Prachi apologizes, they leave while Sahana gets stopped by Rhea who holds her hand harshly.

Sahana escapes by stomping on Rhea’s foot which angers her and she decides to kill Sahana the same day.