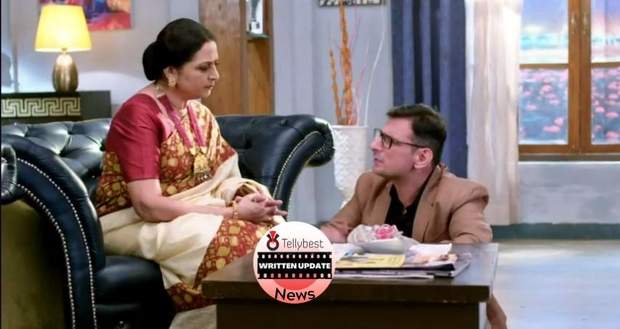 Today's Kumkum Bhagya 17th August 2022 episode starts with Ranbir coming with tea to Prachi so that she can be warm after getting wet by the rain.

However, Prachi says that the tea is drinkable for a single time and is helpful in keeping her warm which upset Ranbir.

Ranbir asks Prachi to be a bit warm-hearted and appreciate the love that he has poured while preparing the tea.

As Ranbir sulks, Prachi shares the tea with Ranbir, and both drink from the same cup simultaneously.

Ranbir spots Prachi’s lipstick mark on the cup and was about to kiss it when Sahana interrupts them by asking them to come to the living room.

After Ranbir scolds Sahana for being the third wheel, all of them assemble in the living room where Pallavi waits for them.

Pallavi informs everyone that the reports are going to be delivered soon and the truth will be clear with it.

The reports arrive and Prachi receives them by herself and gives them to Rhea for her to read it.

Rhea gets silent after she opens the report and passes it to Alia after she asks what the matter is.

As both Alia and Rhea get silent, Prachi says that she will forgive Rhea for her hateful deeds as she is her sister.

Pallavi takes the reports and reads them herself and gets shocked to see that the results are negative meaning Prachi’s child is not Ranbir’s.

Ranbir comes and tears the report as he announces that he trusts Prachi more than the report and will not leave her side.

As Rhea tries to make Ranbir understand, Ranbir shuts her up and says that he is the father of Prachi’s child.

After taking Prachi back to her room, Ranbir comforts her and tells her that he will not let mere things break his trust in her this time.

Prachi and Ranbir share a warm hug to seal their sincerity and trust in each other.

Meanwhile, Siddharth gets chased by the goons in their car and asks for help from the taxi driver.

In the Kohli mansion, Rhea is thanking god for being on her side this time and hugging Aliya when Shaina walks in and explains to her that it is not luck that helped her but she. She gave the compounder the money to change Prachi’s DNA report.

Rhea gets overwhelmed on hearing this but pretends she knew already.

Later she asks her how much money it took her to change the report when they get shocked to see Pallavi standing at the door who has overheard their conversation.

© Copyright tellybest.com, 2020, 2021. All Rights Reserved. Unauthorized use and/or duplication of any material from tellybest.com without written permission is strictly prohibited.
Cached Saved on: Sunday 2nd of October 2022 08:10:49 AMCached Disp on: Thursday 6th of October 2022 03:05:02 PM