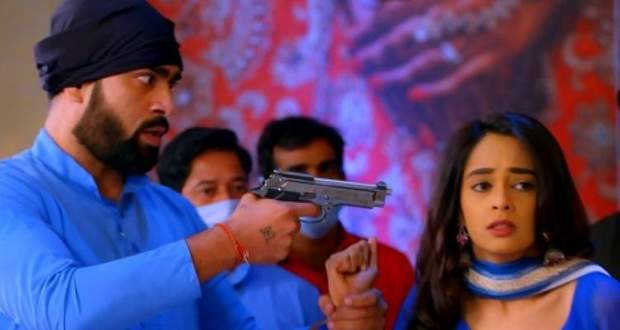 Today's Kumkum Bhagya 17 December 2020 episode starts with Aliya calling Meera who tells her that there is a robbery happening and that Abhi and Rhea are inside the showroom.

Aliya calls the police station to inform of the robbery but is informed that Inspector Saho is already on his way to the crime scene.

Meanwhile, Pragya tells the robbers that she will give them the keys only if she gets to privately talk to Ramnik first.

Pragya tells Ramnik to tell her the key's location but he refuses and runs away.

He reaches outside where Inspector Saho about the situation going on inside the showroom.

A goon informs others that police have reached the scene with Inspector Saho as the head while Rhea accidentally reveals that no one inside the showroom knows the key's whereabouts.

Goons get angry and force Prachi to go to Ramnik and get the key from him in five minutes with the threat of assassinating everyone in the showroom if the task is not done.

Goga Bhai watches the live telecast of the robbery on the news while Prachi comes outside and asks Ramnik for the key's location.

Ramnik reveals the key's location to Prachi while Goga Bhai calls the main goon and treatment him to bring the necklace if they want to live.

Meanwhile, Ranbir, Aaliya, and Aaryan arrive at the scene after which Ranbir tries to go inside but Inspector Saho handcuffs him.

Inside the showroom, Prachi tells the goon key's location and gets told to find the key while Abhi says that he will accompany her as well.