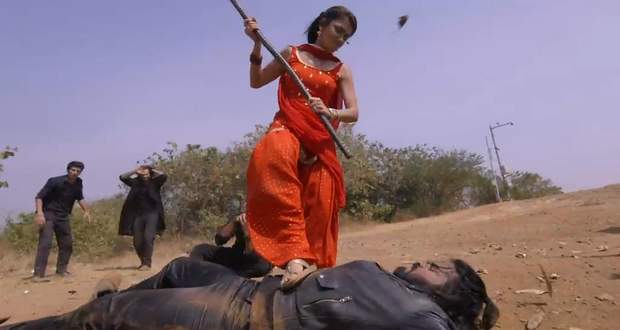 Today's Kumkum Bhagya 17 February 2021 episode starts with Abhi telling Pragya that they are nothing without each other while Pragya says that she knows that already.

Meanwhile, Sarita feels uneasy in the car so Purab stops the car at that time he runs into the goon and recalls him from one of the photos shown by the police.

He looks and sees that the goon has left after which he starts chasing him.

Abhi tells Pragya that there is something which she is not telling him and asks her what is it.

So Pragya takes a promise from him that he will not interrupt her in between.

Then she tells him that after her death he should not remarry so Abhi tells her nothing will happen to us and she is irreplicable.

Digvijay watches them running through the binoculars and calls the goon and informs him that they are going towards the cliff.

The goon shifts into the bike with Ashok and other shooters then they go towards the jungle.

On the other hand, Purab sees the inspector and informs him that he had seen the goon passing by so they both go in the bike to search for Abhi and Pragya.

Abhi and Pragya hear the sound of a vehicle and call for help but the people riding the bike turn out to be goons.

Abhi splashes mud on their face and they both start to escape but stop as a thorn pricks Pragya's leg.

Now Abhi and Pragya reach the cliff while the goons follow them.

Abhi loses his temper and starts fighting with them whon one of the goon hits him from behind.

Pragya snatches the rod from goon’s hand and tells him that if he tries to even touch Abhi, then she is going to break his hand.

She takes Durga Maa’s avatar and keeps her leg on the shooter and is about to stab him with the rod.