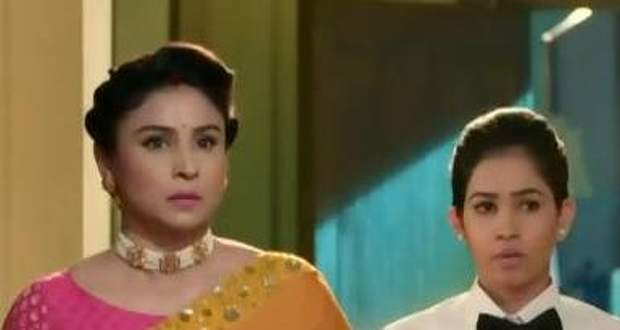 Today's Kumkum Bhagya 17 Jan episode starts with Prachi being behind the bars, talking to herself with fierce in her eyes and revenge in her words.

She says that she will make every person in the Kohli house pay for their sins, be it her sister Rhea or her mother-in-law Pallavi, or her husband Ranbir.

Jai continuously tries to contact Ranbir but fails in doing so, he asks the hotel to inform him as soon as Ranbir checks in the hotel.

Finally, Ranbir calls back Jai and he notifies Ranbir about the situation of Prachi being arrested by the police.

Ranbir gets shocked to hear and quickly commands Jai to book his return flight as Prachi is the most important for him.

Rhea decides to celebrate her victory as Lohri by burning all Prachi's remaining belongings in her room, Aaliyah hesitates a bit but agrees to her decision.

The maid hears their conversation and decides to inform Pallavi.

At the same time, Shahana visits Prachi and informs her about not getting any help from Ranbir till now, Prachi gets angry at her for contacting him.

Shahana suggests contacting Badi Maa but Prachi stops her from remembering the past.

The police ask Shahana to leave as visiting hours are over but she misbehaves with them and proposes to bribe them resulting in them putting her in jail with Prachi.

On the other hand, Ranbir calls the police station and asks if he can talk to Prachi for a minute, the police deny and hangs up on him.

Back in Kohli's residence, Pallavi walks into Rhea and Aaliya discussing their plans and asks what they are talking about.

Pallavi stops Rhea from burning all of Prachi's belongings and tells them that Prachi will return soon to this house.

Upcoming KKB episode updates: Prachi and Ranbir fight with each other in jail.

Shahana stops them while a lady insists them to not shout at Prachi as she is pregnant. Shahana is left shocked.

© Copyright tellybest.com, 2020, 2021. All Rights Reserved. Unauthorized use and/or duplication of any material from tellybest.com without written permission is strictly prohibited.
Cached Saved on: Wednesday 19th of January 2022 12:47:25 PM