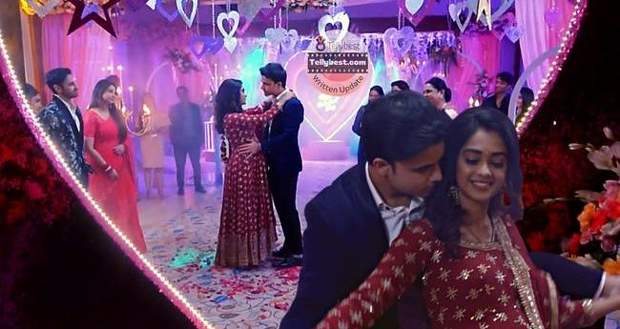 Today's Kumkum Bhagya 17th January 2023 episode starts with Dida and Pallavi feeding ladoos to everyone in the hospital to celebrate the birth of Prachi and Ranbir’s daughter.

Sahana and Aryan come and inform Pallavi and Dida that Ranbir has arranged cakes for the entire hospital staff and patients.

Dida says that cakes are not the thing they should distribute on the arrival of happiness, it is the ladoos that carry that tradition.

Pallavi agrees with Dida’s statement while Sahana suggests they should distribute both ladoos and cakes as they have received the happiest news in their lives.

Agreeing with Sahana’s suggestion, Pallavi and Dida come to the reception but are shocked to see nine cakes ordered by Ranbir.

Aryan explains to Pallavi and Dida that one cake is dedicated to every month of Prachi’s pregnancy.

Pallavi and Dida cut the cake together while Ranbir returns to Prachi and his baby with a special gift.

Ranbir shows a chain with a moon pendant and says that he brought it for their daughter as she has brought the moon and stars into their life.

Prachi says that she expected Ranbir to give that to her as she is the one who brought their daughter into their lives.

Ranbir tries to explain himself to Prachi while she laughs, saying she is joking about the situation.

Alia watches Pallavi, Dida, Sahana, and Aryan celebrating with the hospital staff and says that their happy times are about to end soon.

Sahana comes to give Alia cake but she silently leaves after taking the cake leaving Sahana a bit surprised.

Dida calls Vikram and gives him the news that he has become the grandfather to a little baby girl.

Pallavi remembers Rhea and calls her to tell her the good news.

Rhea gets extremely happy hearing about Ranbir and Prachi’s daughter but refuses to come immediately as she needs time to atone for her deeds.

Pallavi gets a bit upset and asks herself why such things happened to them that ruined all their relationships.

Alia enters Prachi’s room dressed as Nurse and tells Prachi and Ranbir that she needs to give an injection to Prachi.

Ranbir transfers their baby to her cot and holds onto Prachi while Alia injects her with sleeping medicine as the nurse.

As Ranbir watches Prachi drift into sleep, Alia swiftly pokes Ranbir with a needle in his neck making him unconscious.

Alia picks the baby in her arms and gently places a kiss on her forehead saying how beautiful and enchanting she looks.

Alia says that the baby resembles Rhea but has to face consequences as her mother is Prachi.

Rhea receives a call from Ranbir but gets shocked to hear Alia’s voice from the other side.

Alia says that she thought Rhea would be happy to hear her voice after so long but forgot that Rhea has changed.

Rhea screams helplessly as Alia says that the punishment for three murders is also the same as two murders.

Alia says that she has made Ranbir and Prachi drift into a deep sleep while she gets her hands on the tiny living angel in front of her.

Rhea begs Alia not to harm anyone and tries to call Pallavi and others so that she can inform them but no one picks up.

Alia leaves the room with the baby and says that the daughter will face the punishment on behalf of her parents.

Meanwhile, Rhea determines to save Prachi and Ranbir’s baby from Alia at any cost as she loves her from her heart.

© Copyright tellybest.com, 2022, 2023. All Rights Reserved. Unauthorized use and/or duplication of any material from tellybest.com without written permission is strictly prohibited.
Cached Saved on: Wednesday 25th of January 2023 10:23:22 AMCached Disp on: Wednesday 1st of February 2023 08:23:49 PM