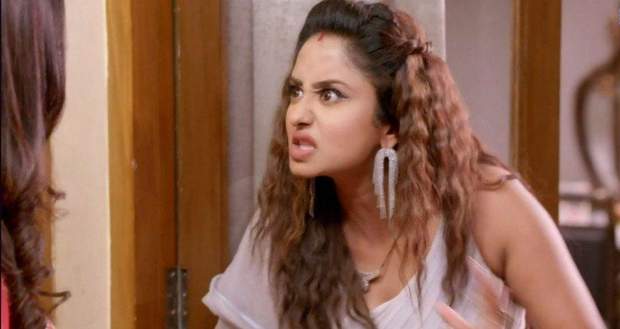 Prachi burns in jealousy on seeing Ranbir willingly encouraging Rhea to finish the drink and walk away.

As the effect of the drug kicks in, Rhea begins to stagger with Ranbir holding her for support.

Stanley and Ranbir hug each other in happiness on the success of the plan which is seen and misunderstood by Dida.

Dida tells Pallavi that Ranbir has deteriorated in his taste and is in a relationship with a waiter.

Meanwhile, Ranbir takes Rhea into his room so that he can successfully finish his work.

Prachi and Sahana come after them while following Ranbir and get taken back when the door is locked from outside.

When Sahana tells Prachi that Ranbir is planning something for her sake, Prachi bursts into anger abruptly and indicates he and Rhea are locked up alone.

Ranbir asks Rhea to sign the papers but forgets to bring the pen.

While Ranbir searches for a pen, Rhea opens the window and asks Prachi to go away as she and Ranbir are having private things going on.

The divorce papers slip from Rhea’s hands which she calls the property papers.

Before Prachi could pick it up and see what it was, Ranbir comes out making Prachi and Sahana hide.

Rhea tells Ranbir that she will sign the papers once Ranbir kisses her.

Ranbir unwillingly advances closer to Rhea while Prachi tenses up outside after hearing Rhea’s words.

Although Ranbir retreats from the middle and does not kiss Rhea, Rhea shouts that he has kissed him making Prachi barge in with betrayal in her eyes.

Prachi announces that she is leaving the house and walks away.

Ranbir was about to follow her but gets stopped by Rhea as she asks where to sign.

After Ranbir successfully takes Rhea’s sign, he begins to dance in joy without knowing that Prachi has left the house.

Stanley follows Prachi and Sahana and reaches an unknown locality while Ranbir freezes in shock on seeing Prachi’s empty wardrobe.

© Copyright tellybest.com, 2022, 2023. All Rights Reserved. Unauthorized use and/or duplication of any material from tellybest.com without written permission is strictly prohibited.
Cached Saved on: Wednesday 25th of January 2023 07:21:47 PMCached Disp on: Sunday 5th of February 2023 12:43:49 PM