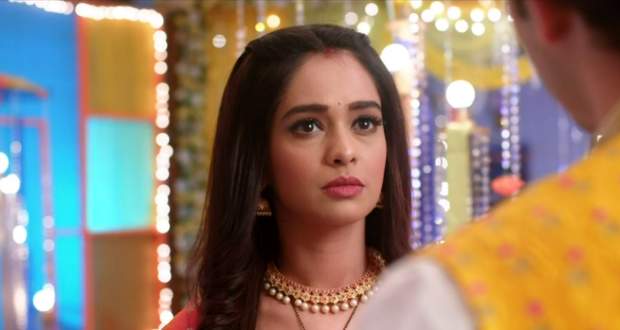 Today's Kumkum Bhagya 17th March 2022 episode starts Sahana inspecting Prachi’s hands and face to see if it got burnt or not.

Prachi refuses to believe and tries to calm down Sahana as she tells Prachi that it was Rhea’s plan to harm her.

Despite knowing Rhea’s nature, Prachi keeps on believing that Rhea cannot do something so drastic as throwing chemical colors on her sister.

Amid the argument between Prachi and Sahana, Dida appears in the room and hears all about the attack on Prachi.

Worried to the core, Dida checks on Prachi and rushes to the temple to bring a “Raksha Kavach” for Prachi’s safety.

As Dida talks with Sahana about Prachi’s condition, Ranbeer comes and asks Dida what the matter is.

After Dida tells Ranbeer about the attack on Prachi, he takes the thread from Dida and rushes to Prachi with his heart beaming with concern.

Ranbeer comes into Prachi’s room hurriedly and inspects any wounds on her body.

Seeing this, Prachi pushes away Ranbeer from her and asks why he had come there acting like he is concerned for her.

Ranbeer tries to show his love and concern for Prachi but Prachi acts harshly with him, reminding him how he slept with Rhea that night.

On hearing this, Ranbeer tells Prachi that he was drunk and did not get intimate with Rhea but Prachi refuses to believe him.

Angered by Prachi’s behavior, Ranbeer announces that he will get lost from Prachi’s life forever.

Ranbeer leaves the room and throws away things in anger when Sahana tries to calm him down.

Without listening to Sahana, Ranbeer appears in Rhea’s room and drives Aaliyah out of there to talk with Rhea.

Boiling with anger, Ranbeer asks Rhea why she slept with him even though she knew that he loves Prachi.

However, Rhea plays the victim card and tells Ranbeer that he forced her to sleep with him despite her constant resistance.