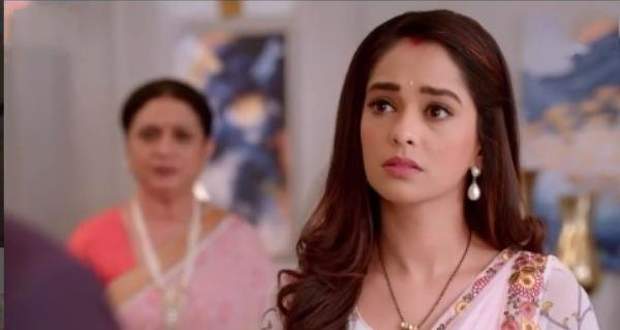 Today's Kumkum Bhagya 17th May 2022 episode starts with Rhea asking Alia to whom she was talking earlier on the phone after finding her in the kitchen.

Alia tells Rhea that she is going to avenge her by taking Prachi’s symbol of marriage from her.

After Rhea requests Alia to tell her everything, Alia reveals that she has hired goons who will snatch Prachi’s mangal sutra from her.

Rhea jumps with happiness on hearing Alia’s plan and smirks to herself while waiting for the good news.

Meanwhile, Prachi prays to the god to give her the strength to fight evil and protect her husband and child.

After getting blessings from the priest, Prachi comes out of the temple where the goons wait for her.

Prachi continues on her way when suddenly the goons attempt to snatch away Prachi’s mangal sutra from her neck.

While struggling to keep her mangal sutra to herself, Prachi shouts for help which resonates in Ranbir’s ears as he stops in front of the temple.

Ranbir gets out of the car and searches for Prachi and discovers her in the alley struggling with the goons ganging up on her.

Landing a straight punch, Ranbir beats up the goons but tells Prachi to hand over her mangal sutra once they take out their knives.

Prachi refuses to give her mangal sutra which leads to Ranbir kicking off the goons mercilessly and making them escape from there at once.

However, the mangal sutra gets off Prachi’s neck in the tussle which Ranbir puts back on Prachi with his own hands.

Ranbir hugs Prachi with concern and care reflecting in his touch making Prachi melt in his embrace.

However, the goons turn back their bike to chase Ranbir and Prachi after Alia instigates them to complete the task.

Ranbir was about to get into the car after making Prachi sit inside when the goons land a hard blow on his head.

They start beating up Ranbir mercilessly but Ranbir strikes back after they snatch away Prachi’s mangal sutra again.

After Ranbir succeeds in getting back the mangal sutra from the goons, he hurries back into the car but gets stopped by one of their partners who arrives there.

The goon asks Ranbir to hand over the mangal sutra but Ranbir refuses to do so even though Prachi surrenders.

Without a second thought, the goon pushes his knife into Ranbir’s stomach making him gasp in shock and pain.

Prachi goes berserk and shoos the goons away after injuring one of them with the knife and then runs to Ranbir.

Feeling helpless, Prachi begs for help from the bystanders while Ranbir breathes heavily with blood gushing out of his mouth and stomach.

© Copyright tellybest.com, 2020, 2021. All Rights Reserved. Unauthorized use and/or duplication of any material from tellybest.com without written permission is strictly prohibited.
Cached Saved on: Monday 3rd of October 2022 12:07:37 PMCached Disp on: Friday 7th of October 2022 02:12:02 PM