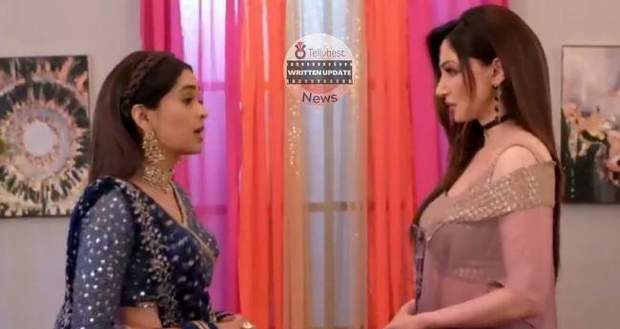 Today's Kumkum Bhagya 17th November 2022 episode starts with Ranbir and Prachi hiding from the goons guarding the warehouse so that they do not get caught.

Meanwhile, the big boss instructs the senior goon that they should catch Rhea as her family is rich and can give them a lot more money.

Rhea calls Alia somehow and informs her about the plan of the goons to sell Mihika to get money.

Suddenly, a goon catches Rhea and covers her face with a black mask.

Prachi spots Sahana hiding in one corner while Ranbir notices Aryan standing in the other corner.

As Ranbir talks about Aryan, Prachi asks why he is changing Sahana’s gender but then realizes that both Sahana and Aryan are present there.

The goons proceed in Sahana’s direction which makes Ranbir and Prachi concerned.

Aryan throws a stone in the other direction making the goons look in that direction while he quickly rushes to Sahana and gets out from there.

Ranbir and Prachi also follow Aryan and Sahana and come out of the warehouse to save themselves from the goons.

Prachi asks Ranbir why he took her out of there to which Ranbir replies that they need to save themselves before saving others.

Meanwhile, Rhea bursts into anger after the goons bring her back to the warehouse and say that she gave them money and left.

The goon tells Rhea that she got away because they allowed her to do so but now, they have changed their plan.

Rhea opens Mihika’s mouth and asks her if she is enjoying seeing Rhea in the current situation.

Mihika starts to laugh and mocks Rhea for returning to the goons even after paying the price to be free.

As Mihika states that Rhea can never have Ranbir, Rhea pounces on her and both start to fight with each other aggressively.

Returning to the rescue squad, Sahana asks Ranbir and Aryan to think of a plan to save them from the crisis.

Prachi jokes about the police coming there and driving the goons away but her words give Ranbir an idea.

Ranbir takes out a suitcase from his car and tells them that he arranged a few costumes for a fancy party at his office.

With nothing left for Prachi, she gets angry and sulks like a teenager while the others come out after changing their costumes.

Ranbir, Sahana, and Aryan go inside the warehouse and ask Prachi to wait outside as she is the weakest link.

© Copyright tellybest.com, 2022, 2023. All Rights Reserved. Unauthorized use and/or duplication of any material from tellybest.com without written permission is strictly prohibited.
Cached Saved on: Monday 21st of November 2022 01:03:16 AMCached Disp on: Thursday 1st of December 2022 12:50:03 PM