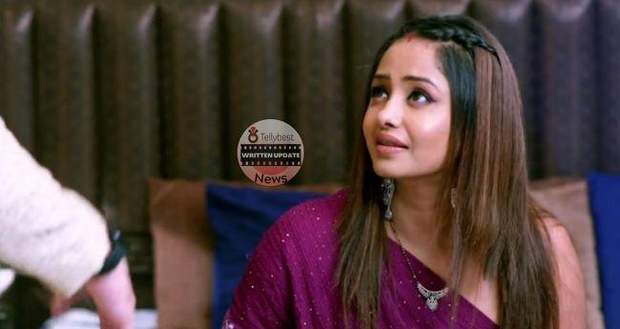 Prachi tries to walk away, but Ranbir pulls her close to him and continues dancing in slow motion.

As Prachi frees herself and tries to walk away once again, she almost hits her head at the edge of the furniture but Ranbir saves her.

Everyone gets shocked to see Prachi fall down suddenly and gathers around her to check on her.

Ranbir anxiously hugs Prachi tightly in his arms taking her by surprise as he gets frightened by seeing her in danger.

Prachi faintly smiles while nuzzling her face in Ranbir’s chest while Rhea shivers in anger.

Meanwhile, Sahana continues to find the report inside the envelope but fails to get it anywhere in the room.

On her way out of the room, Sahana bumps into Rhea who gets furious to see her inside her room.

Sahana gives some excuse and escapes from there which increases Rhea’s pent-up anger.

Alia comes out of the washroom and tells Rhea how she saved her from getting caught by hiding the reports at the correct time.

On the other hand, Prachi comes into her room and sees Ranbir standing there with a serious face.

Prachi asks Ranbir what he is doing in her room to which Ranbir replies with another question.

Ranbir asks Prachi how she can be so careless and lead herself to such a big danger of getting injured.

To defend herself, Prachi blames Ranbir for forcing her to dance and tells him that she can take care of herself.

Prachi asks Ranbir what makes him different from Sid to which Ranbir replies that he loves her like a mad person.

Prachi gets surprised to hear those words from Ranbir while Ranbir makes it clear that no matter what happens, he has always loved her and will continue to love her.

However, Rhea hears this entire conversation and goes berserk after coming back to her room.

Seeing Rhea’s condition, Alia proposes that they finish off Prachi completely on the occasion of Diwali.

Alia leaves the house and visits a clothing store where the shopkeeper agrees to prepare such a dupatta that will catch fire when the person is near a fire.

Alia asks the shopkeeper to prepare the dupatta as soon as possible so that she can finish off Prachi the next day.

After Sahana tells Prachi about the missing reports, both of them begin to search for them which makes Rhea nervous.

Later, Alia comes back and spots Rhea crying in the corner of the washroom and immediately provides comfort to her.

Rhea says that she is trying to fight for Ranbir when it is Ranbir who does not want to stay with her.

© Copyright tellybest.com, 2022, 2023. All Rights Reserved. Unauthorized use and/or duplication of any material from tellybest.com without written permission is strictly prohibited.
Cached Saved on: Monday 21st of November 2022 02:05:34 AMCached Disp on: Thursday 1st of December 2022 01:29:33 PM