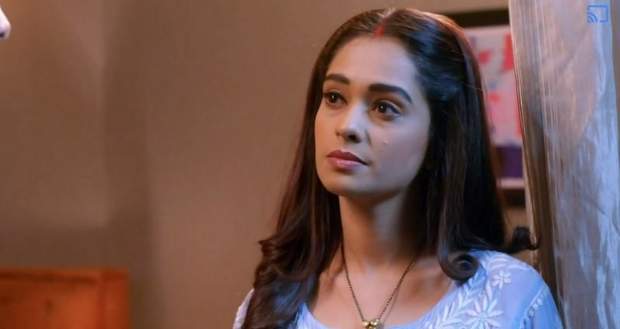 Today's Kumkum Bhagya 18th April 2022 episode starts with Ranbir questioning Rhea and Aaliyah about the whereabouts of Nick as he spotted Nick’s shoes outside a moment earlier.

Aaliyah and Rhea succeed in confusing Ranbir and Prachi with their acting and logic of Nick still being unconscious.

Pallavi barks insult at Prachi after seeing her and Ranbir together on the rooftop but gets caught by Ranbir.

Hearing Pallavi’s vengeful words for Prachi, Ranbir tells Pallavi that he loves Prachi like a madman and will not stop even if Prachi does not revert back his feelings.

Ranbir tells Pallavi about the instance when he asked Prachi whether she would live with him away from the family and she refused because she did not want to separate him from his family.

Prachi overhears their conversation up to this and walks out of there.

However, Pallavi interprets it in another way and tells Ranbir that his life will be painful as Prachi does love him back and will not give up anything for him.

Dida comes and interrupts Pallavi by trying to make her notice Prachi’s good intentions behind her decision.

Meanwhile, Aaliyah plans to put Nick inside the trunk in his unconscious state in the dark and proceeds to put off the light.

Rhea begins to rain her anger on Nick and slaps him when Vikram wakes up and asks her what she was doing.

Preeti calls Nick which makes his phone ring in the cupboard; however, Rhea distracts Vikram with an excuse and answers Preeti that Nick will come home soon.

As Aaliyah switches off the main switch of the house, Sahana appears and announces to reveal Aaliyah and Rhea locking up Aaliyah inside the room.

Seeing an opportunity, Rhea releases Nick and asks him to get out of the house through the back door.

Vikram runs after Nick as he escapes and calls for Ranbir, asking him to chase after him.