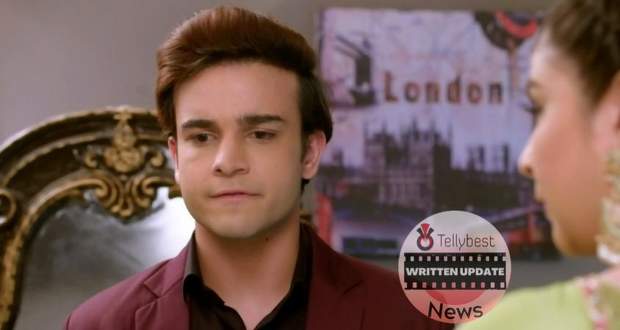 Today's Kumkum Bhagya 18th August 2022 episode starts with Pallavi coming into Alia’s room and asking Alia, Rhea, and Shaina what they are talking about.

Pallavi apologizes to Rhea for acting rudely toward her and says that she does not trust Prachi fully.

While passing through the corridor, Ranbir hears Pallavi talking with Rhea that she does not trust Prachi anymore after seeing the DNA reports.

Ranbir comes in and asks Pallavi not to say something that she will regret later.

As Pallavi asks Ranbir to open his eyes and see the truth, Ranbir replies that he trusts Prachi and only suspected her in the past.

Ranbir says that he will not silently watch them do harm to Prachi and will leave the house with Prachi.

Hearing that, Pallavi slaps Ranbir which shocks everyone.

Pallavi says that for Ranbir only Prachi matters and he does not care anything about his own mother.

Ranbir replies that he loves Pallavi utterly as she is his mother but the things, he has learned from the world clash with Pallavi’s teachings.

With belief in his eyes, Ranbir says that even if there are 100 reports that are against Prachi, he will still be on her side.

Meanwhile, Siddharth gets nervous as the goons approach him after the taxi stops due to a traffic signal.

The goon was about to attack Sid with a gun but backs down after seeing a police inspector there.

The police inspector turns out to be Siddharth’s childhood friend and they leave for the Kohli mansion together.

As the conversation is going to be started, Pallavi sends Rhea to call Prachi to the living room.

Rhea asks Prachi to come to the living room but Prachi still places a second chance on Rhea to confess the truth.

However, Rhea refuses to tell anything and all of them come out to the living room.

Rhea asks Siddharth if Prachi is going to be his child’s mother which shocks him utterly.

Siddharth announces that Prachi is not going to become the mother of his child under any condition.

© Copyright tellybest.com, 2020, 2021. All Rights Reserved. Unauthorized use and/or duplication of any material from tellybest.com without written permission is strictly prohibited.
Cached Saved on: Friday 30th of September 2022 07:16:28 PMCached Disp on: Saturday 1st of October 2022 12:13:27 AM