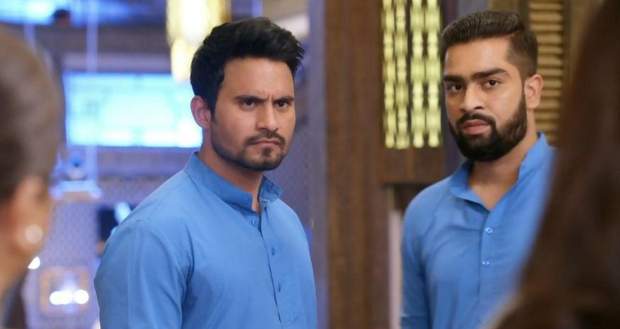 Today's Kumkum Bhagya 18 December 2020 episode starts with the robbers getting the expensive necklace from the locker with the help of Abhi. Rhea gets into an argument with Prachi and Shahana.

Abhi comes downstairs along with the robbers, while Prachi and Rhea hug him out of love and care.

Further, the robbers decide to release everyone and ask them to leave the place. Rhea gets adamant to take her jewellery along with her.

A goon pushes Abhi out of anger, while Ranbeer requests the police officer to let him go inside the jewellery store.

Ranbeer and Meera rush to get inside along with Aaryan and Aliya. Meanwhile, Rhea hits the goon for pushing Abhi forcefully.

Later, Abhi holds a goon at gunpoint and orders the robbers to get down their guns. A robber hits Abhi which makes him get unconscious.

Rhea asks Pragya to help her, while a goon rushes towards Prachi to stab her with a knife. Pragya manages to save her by pushing the goon. The police arrive there and capture all the robbers.

Sarita asks Abhi to give her a promise to keep Pragya happy. Abhi promises her that he will do his best to give everything that Pragya deserves.

Pragya congratulates Meera and Abhi for their marriage decision, while Aliya refuses Ranbeer to go along with Pragya and Prachi.

Abhi and Pragya get emotional but don’t talk to each other. Elsewhere, Pallavi feels relaxed on seeing everyone safe.

Rhea tells Abhi that she brought the jewellery along with her. On the other hand, Prachi questions Aaryan if Ranbeer is worried about something.

© Copyright tellybest.com, 2020, 2021. All Rights Reserved. Unauthorized use and/or duplication of any material from tellybest.com without written permission is strictly prohibited.
Cached Saved on: Tuesday 2nd of March 2021 12:52:09 PM