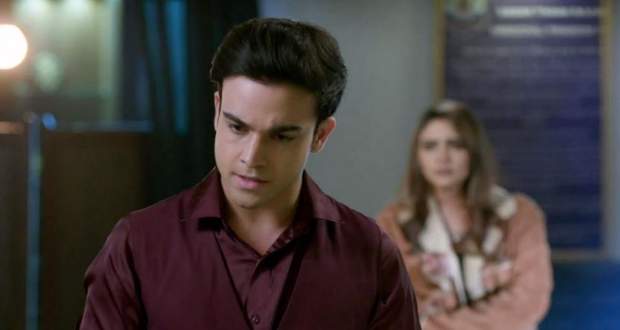 Today's Kumkum Bhagya 18th February 2022 episode starts with Prachi crying her heart out after coming back into her room as she sees her forehead without the red shade of Kumkum.

Dida comes after her and tries to comfort her by asking her to refill her forehead with her Kumkum.

However, Prachi refuses to do so and tells her that a major drama will have to be caused for her Kumkum to return to its place.

Meanwhile, Aaliyah instigates Pallavi against Prachi by telling her how Prachi is driving Vikram away from Pallavi for her benefit.

A phone call comes from the police station to Prachi informing her about the arrest of Ranbeer and Rhea.

Prachi hands over the phone to Pallavi and tells her that she will need Prachi very soon.

After the police officer spills the truth of Ranbeer and Rhea’s arrest, Prachi, Dida, and Sahana leave separately while Pallavi, Vikram, and Aaliyah after them.

Back to the police station, Rhea argues with the police officer asking him if he did all that on Prachi’s orders.

Prachi enters the police station with Dida, Sahana, and the women from “Mahila Sangathan” (Women’s Association) and declares that she is the wife of Ranbeer.

On Rhea’s claim that Dida knows the truth, the policeman asks her if Rhea is the wife of Ranbeer to which Dida replies that Prachi is the only wife of Ranbeer.

Rhea rushes to Pallavi and Aaliyah and asks them to tell everyone that she is the wife of Ranbeer, not Prachi.

However, Prachi gives the name of “second woman” to Rhea and tells everyone how Rhea was snatching her husband from her.

The women from the association explain the matter to the police and blame Rhea for trying to destroy Prachi’s household.

She declares that it is illegal for Ranbeer to marry another woman as long as Prachi, his first wife, is alive.

The police support Prachi’s statement and say that Ranbeer can go to jail for doing that.