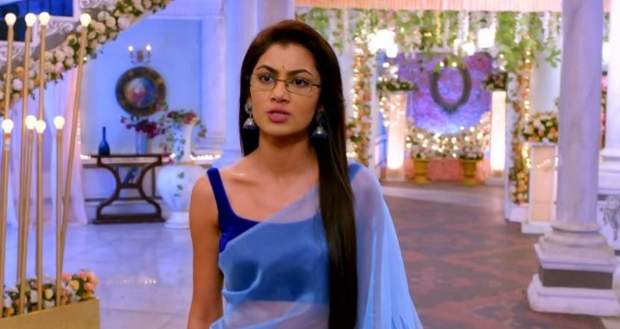 He signs Purab and Purab purposefully pushes him and makes the garland fall from his hand.

Abhi takes Meera's garland and puts it on himself while Meera wears Abhi's garland.

Baljeet refuses to do their Gathbandhan while Aaliya tells Tai Ji to do it as she is also an elder of the house.

Elsewhere, Ranbir gets worried as the Priest is not coming while Jai stops and man and he tells them that today is the most a specious day to get married and tells them that no Priest will be found as they have been already booked.

Aaryan comes and also says that he couldn't find a Priest in the whole Delhi which anger Ranbir and he chases him.

He collides with Prachi while she asks Sahana why she didn't tell her they were going to be at the temple too.

Tai Ji is doing the Gathbandhan while Pragya comes there and tells them to stop.

Ranbir acts of getting angry and says that she is here just for Jai and Palak while they come there.

Aaryan says that he is going to find a Priest while Sahana starts berating him which makes Ranbir scared that their plan might expose.

Meanwhile, Pragya goes towards the Mandap and removes the garland from Abhi's neck and throws it into the fire.

Aaliya tells her to apologize to Meera as she is Abhi's wife while Pragya declares that she is the wife Abhi.

Aaliya tries to throw her out of the house while Pragya calls in the police and tells them to arrest Aaliya and Meera.

Abhi asks Pragya what is her problem while she rebukes him saying that he is shameless to marry another woman while she is alive.

She further questions the family for supporting Abhi in doing illegal marriage.

© Copyright tellybest.com, 2020, 2021. All Rights Reserved. Unauthorized use and/or duplication of any material from tellybest.com without written permission is strictly prohibited.
Cached Saved on: Tuesday 2nd of March 2021 03:56:48 PM