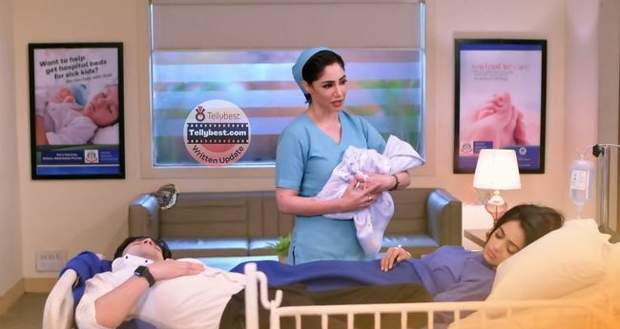 Today's Kumkum Bhagya 18th January 2023 episode starts with Alia telling sleeping Prachi that she has used Rhea against her so now she will also use Panchi for her benefit.

Looking at sleeping Prachi and Ranbeer, Alia adds that they will not wake up now and they will soon hear her voice again.

Alia walks away with Panchi after putting the mask on while Prachi gets a blurry vision of Alia telling her that she will not see Panchi when she wakes up.

Prachi however again goes to sleep whereas Rhea continues to press her car horn so other people give her space to go on the street.

Rhea's desperate attempt to save Panchi

Rhea looks at the cars in front of her with desperation and tells herself that it will take a lot of time but she does not have any time on her hand.

Back in the hospital, everyone is busy celebrating Panchi’s arrival and Dida happily urges Shahana to give Prachi and Ranbeer sweets.

After Shahana walks away happily, a doctor arrives there to scold the Kohli family for disturbing the peace in the hospital.

Back on the streets, Rhea begs the car drivers to give her a ride to City hospital and after a lot of rejection, a bike rider finally agrees to give Rhea the ride.

Meanwhile, in the hospital, Dida starts complimenting the doctor by calling her pretty so she let them enjoy the moment.

Looking at the Kohli ladies feeding the doctor sweets, Aryan sadly wishes Alia to be like them so she can also celebrate with the family.

On the other hand, Shahana notices disguised Alia walking in the corridor with Panchi and she even mentions that this is Panchi but Alia walks away without uttering any words.

Though Shahana thinks it is odd, she dismisses it thinking maybe the nurse did not hear her.

Pallavi and Dida get worried when they notice so many missed calls from Rhea on their phones and Rhea arrives there just then.

Rhea even asks about Ranbeer and Prachi in a panicked state while Dida and Pallavi mention they are both in a hospital room.

Desperate Rhea runs toward Prachi’s room while Dida and Pallavi stand there clueless.

Afterward, in the hospital room, Rhea orders Shahana and Aryan to wake Prachi up and even mutters that Alia has taken Panchi with her.

Meanwhile, Alia is walking out of the hospital in nurse disguise when the doctor asks her to reveal why she has a new baby in her arms.

Back in the hospital room, Ranbeer wakes up feeling dizzy whereas Prachi wakes up in a shocking state as Alia’s words come rushing back to her.

She takes Alia’s name and starts searching for Panchi in desperation and Rhea is looking through the hallway for Alia but she does not find her.

However, Prachi blames Ranbeer for Panchi’s missing as he is the one who forced her to take the injection.

Later outside the hospital, Ranbeer checks each taxi while Prachi continues accusing him of not being responsible.

Just then a nurse informs them that she saw another nurse taking a newborn with her who has booked a taxi.

Rhea then screams that neither Prachi nor Ranbeer is at fault this time to calm Prachi down and Prachi runs to the street in search of Alia.

However, Prachi’s attempt to find Alia goes in vain as Alia hides under the seat of the taxi.

Prachi lets out a heart-shattering scream and falls to the ground in the middle of the road watching the cars pass by as she thinks Panchi is in one of them.

Meanwhile, Alia takes Panchi to the warehouse and tells her to not trust her blindly with a creepy laugh.

At first, Ranbeer tries to calm down Prachi but when Prachi does not stop, Ranbeer yells that she is the one who sent Alia to jail so now she is after Panchi.

Feeling shaken, Prachi asks if she is the one who is responsible and she falls to the couch feeling sudden pain in her stomach.

Pallavi scolds Ranbeer for behaving badly with Prachi despite knowing she has given birth to a baby just now.

Ranbeer then holds unconscious Prachi and takes her to the room while Rhea calls the doctor for Prachi.

After that, the police arrive there and Rhea announces that she knows all the secret hiding spots of Alia.

One by one all the Kohli members announce that they will search for Alia and the police agree to take them.

Neither Rhea nor Pallavi finds Alia in different locations whereas Prachi pleads with Ranbeer to bring Panchi back after coming to consciousness.

© Copyright tellybest.com, 2022, 2023. All Rights Reserved. Unauthorized use and/or duplication of any material from tellybest.com without written permission is strictly prohibited.
Cached Saved on: Wednesday 25th of January 2023 09:34:20 AMCached Disp on: Sunday 5th of February 2023 02:59:14 AM