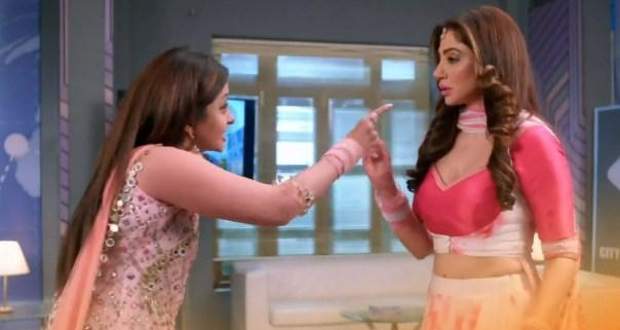 Today's Kumkum Bhagya 18th July 2022 episode starts with Ranbir announcing that he was aware of Prachi’s pregnancy beforehand and was ready for the truth to come out.

Ranbir tells Pallavi how Prachi is the only one with whom he wants to start his life as a parent.

As Ranbir explains how he has planned out everything for him and Prachi by buying their old apartment, Rhea leaves there fuming with anger.

Ranbir explains how he was about to surprise Prachi at their anniversary party but failed to do so as Rhea’s pregnancy news came out.

When Pallavi tries to instigate Ranbir that Prachi’s baby does not belong to him, Ranbir bursts into anger and announces that he is sure that he is the father of Prachi’s baby.

Elsewhere, Rhea panics thinking that everything is over now that Prachi is pregnant with Ranbir’s child.

Alia tries to calm Rhea down but her efforts backfire and Rhea begins to blame Alia for not noticing Prachi’s pregnancy.

Hearing Rhea’s continuous insults, Alia loses her patience and tells Rhea that whatever is happening is because of her carelessness and that she deserves it.

Pallavi asks Ranbir to stop his madness as he is going to be the father of Rhea’s child because she gave him the news first.

However, Ranbir refuses to listen to Pallavi and says that he will stand with Prachi as she is the one, he loves.

Pallavi asks Ranbir to tell Prachi to abort his child as Ranbir cannot become the father of two children from different women.

Hearing Pallavi’s words, everyone gets shocked and asks her to notice what she is uttering.

Ranbir, Sahana, and Stanley leave to distribute sweets among the people in the hospital to tell happy news.

Stopping Vikram and Dida, Pallavi tries to persuade them that Prachi cannot become the mother of Ranbir’s child at any cost.

Later, Prachi hears about Ranbir being crazily happy after hearing about her pregnancy and feels a bit better.

On the other hand, Alia tries to instigate Pallavi by saying that Prachi must have told Ranbir to act like that but gets shunned by Ranbir himself.

Dida asks Alia to stop and shuts her up when she talks to her disrespectfully.