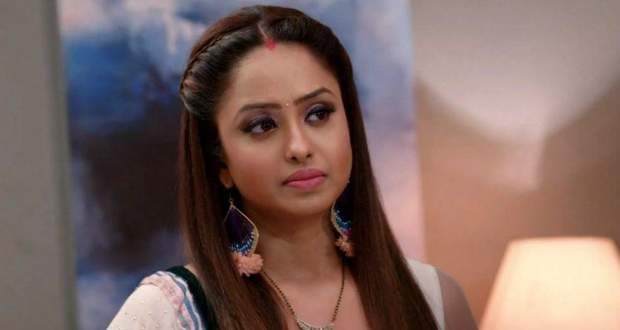 Today's Kumkum Bhagya 18th March 2022 episode starts with Rhea telling Ranbeer that he forced her to sleep despite her resistance on that night.

Acting like a victim and shedding tears, Rhea makes Ranbeer feel guilty about it, making him apologize to her.

Ranbeer decides to find out the person who drugged him and seal this matter permanently.

As Ranbeer leaves Rhea’s room, Rhea and Aaliyah burst into laughter as Rhea explains how she managed to fool Ranbeer.

Rhea tells Aaliyah how she turned the situation in her favor by playing the victim and blaming Ranbeer for forcing her.

Aaliyah praises her and both rejoice their victory is forming distance between Prachi and Ranbeer.

Meanwhile, Sahana tells Dida that they have to solve the issues between Prachi and Ranbeer as soon as possible for them to stay happy.

Dida asks Sahana to search for the truth as it can solve all the misunderstandings between Prachi and Ranbeer.

While passing each other, Ranbeer thinks about how to search for the person who made him drink the drugged thandai and Prachi regrets talking so harshly to Ranbeer earlier.

On the other hand, Aaliyah tells Rhea to instigate the hatred formed between Prachi and Ranbeer.

As they were discussing their plan of drugging Ranbeer, Aaliyah catches Sahana eavesdropping on them.

Later, Ranbeer remembers that it was Aaliyah who gave him the thandai on Shiv Ratri.

The fan of Prachi’s room stops working, making her agitated due to the heat.

Ranbeer comes and tells Prachi that she can sleep in his room as he will be in the study the whole night but Prachi refuses coldly.

Later, at night, defeated by the heat, Prachi comes into Ranbeer’s room to sleep while Ranbeer watches her from the washroom with adorable eyes.