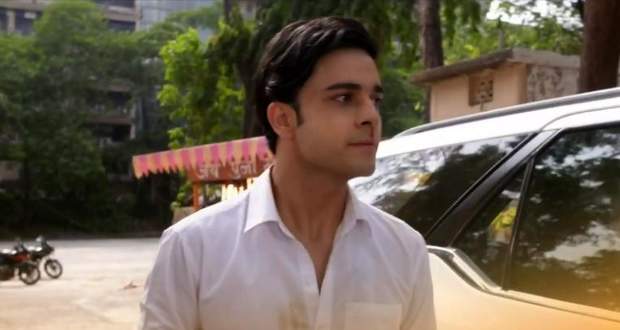 Today's Kumkum Bhagya 18th May 2022 episode starts with Prachi begging for help from the bystanders so that she can take Ranbir to the hospital.

With her panic-stricken mind, Prachi calls Pallavi so that she can ask for her help but Pallavi does not pick up.

Prachi shouts for help from everyone while trying to keep Ranbir conscious but Ranbir faints in the lap of Prachi.

Just then, a lady comes to help Prachi and motivates others to call for a taxi so that she can take Ranbir to the hospital immediately.

On her way to the hospital, Dida calls Prachi and asks her what the matter is as she hears sobbing noises from Prachi’s side.

Prachi tells Dida to come to the city hospital immediately as she is taking Ranbir there because he has been stabbed.

Dida freezes in her spot on hearing Prachi’s words with her phone crashing on the floor.

Vikram, Pallavi, and others gather around Dida and get horrified on hearing that Ranbir has been stabbed.

Prachi requests Ranbir to stay awake and promises to do as he wishes from now on.

On reaching the hospital, Ranbir gets transferred into the operating room and the doctor asks Prachi for her consent for Ranbir’s operation.

Prachi gets mortified on hearing that Ranbir has a chance of perishing amid the operation but gives her verbal consent to the doctor.

The family members get shocked on hearing the consent matter as they reach the hospital.

Pallavi comes to Prachi and lands a slap on her face while questioning her authority for giving consent for Ranbir’s life.

Further, Pallavi mocks Prachi for not being a mother herself and announces that only she has the right to make decisions for Ranbir’s life.

However, the doctor refuses to operate on Ranbir after Pallavi refuses to sign the consent papers which makes everyone anxious.

Prachi goes forward and signs the consent form and tells the doctor to continue Ranbir’s operation without interruption.

Pallavi, Vikram, and Prachi watch Ranbir’s unconscious body through the glass door and reminisce their memories with him.