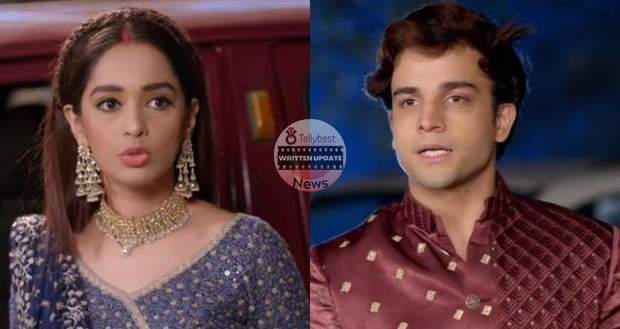 Today's Kumkum Bhagya 18th November 2022 episode starts with Rhea asking the goons to let her go if they do not want to get into danger.

The goons laugh at Rhea and mock her for her stupid brain while pointing guns at her.

Rhea throws a box at them in anger which makes the goon angry and he threatens to shoot Rhea then and there.

While one goon guards Mihika, Ranbir and Sahana appear in front of him as police and ask him to drop his gun.

The goon falls on his knees in fear and runs away from them while shouting that the police have arrived.

Meanwhile, Prachi decides that she will go inside the warehouse but instantly rushes back as she sees the goons guarding the outside.

Prachi tells herself how brave and intelligent she is and thinks about Ranbir and Sahana enjoying beating up the goons alone.

Just then, Dida calls Prachi and asks her where she is as Pallavi and Alia are searching for her in the house.

Prachi explains the situation to Dida while Sid also joins her in listening to the problem.

Asking Dida to manage the situation at the house for a bit, Prachi hangs up while Sid asks why they are saving Rhea.

Dida says that Prachi has a good heart and takes Sid with her to find a solution to please Pallavi.

Prachi again tries to get inside but fails and looks for another way to help the others.

Meanwhile, Ranbir and Sahana hide after watching the goon holding guns at them which makes the goons suspicious.

Sahana asks Ranbir why they are hiding when they are the police and asks him to fight them bravely.

Ranbir gets out followed by Sahana and asks the goons to drop their guns but the goons do not follow them.

The leader asks Ranbir if they are real policemen to which Ranbir and Sahana act all tough and rowdy.

However, the goons throw dust at them and run from there taking Rhea and Mihika with them.

A person appears at the door and closes it making everyone reach a dead end.

It turns out to be Prachi wearing the costume of Basanti. The goons feel weak in their knees after seeing her.

Prachi tries to seduce one of the goons using her looks but Ranbir interrupts her continuously as he gets jealous.

As Ranbir and others try to walk out silently, the leader of the goons fires a shot in the air and stops them.

Ranbir starts to beat up Aryan and asks him to act dead so that he can frighten the other goons.

Sahana takes away their guns but the goons hold a knife at Prachi’s throat making everyone freeze.

Aryan acts like he does not know them and begs for forgiveness while trying to take the gun from Rhea.

As Aryan takes the gun, Ranbir laughs victoriously and warns everyone as they have a real gun now.

Aryan asks Ranbir to stop flexing as the gun has no bullets in it.