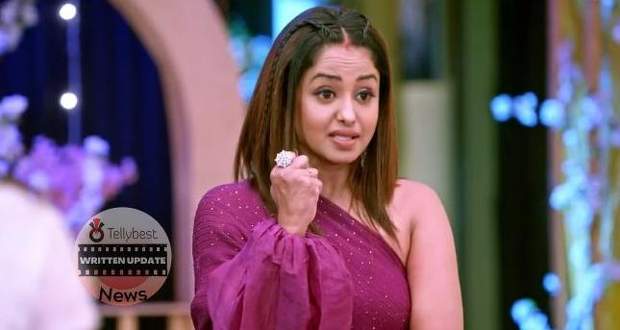 Today's Kumkum Bhagya 18th October 2022 episode starts with Rhea telling Alia about Prachi and Sahana searching for her pregnancy reports for which Alia assures her that they cannot find them.

Rhea expresses her concern for Prachi after realizing that Alia will do something dangerous.

Alia asks Rhea if sisterly instincts have arisen again, to which Rhea replies that she is scared of them getting caught.

Alia assures Rhea that no one will be able to catch them and Prachi’s death will look like an accident to everyone.

The next day, Alia meets with the tailor who hands her two dupattas of the same color and mentions that the number 1 is the “special” one for Prachi.

Alia bumps into Pallavi and asks her to hand the dupattas to both Rhea and Prachi as she has bought them from the temple.

As Pallavi asks Alia why the dupattas are numbered, Alia tells her that number 1 is for Prachi because it is from the god she believes in and it is the same in Rhea’s case.

Pallavi thanks Alia for her thoughtful deed and calls both Prachi and Rhea to hand them the dupattas.

After both Prachi and Rhea come, Pallavi hands them their dupattas and says that it is her blessing for their children’s long life and good health.

Prachi feels very happy after receiving such a heartfelt gift while Alia and Rhea smirk to themselves as their plan is halfway done.

Later, the party starts with an old friend of Vikram, named Sanjay coming there with his daughter Neha.

Aryan, Dida, Vikram, and everyone welcomes her but her eyes get stuck after she sees Ranbir entering the party.

Rhea and Prachi also stare at Ranbir as he looks extremely handsome in the traditional look.

However, Ranbir completely ignores both Prachi and Rhea and walks off with Neha after having a hug with her.

Prachi goes after Rhea and tells her not to call Ranbir her husband which offends Rhea.

Rhea reminds Prachi that she is going to get married to Sid and has no right to say that to her.

Prachi reminds Rhea that Ranbir’s Kumkum Bhagya belongs to her and no one can separate that in this life.

Hearing this, Rhea challenges Prachi that whoever among them succeeds in doing the Diwali arti with Ranbir will have Ranbir by herself.

On the other hand, Sid asks Alia to let him meet Mihika as he cannot spend his Diwali in the current situation.

© Copyright tellybest.com, 2022, 2023. All Rights Reserved. Unauthorized use and/or duplication of any material from tellybest.com without written permission is strictly prohibited.
Cached Saved on: Monday 21st of November 2022 08:46:14 PMCached Disp on: Saturday 10th of December 2022 01:42:36 PM