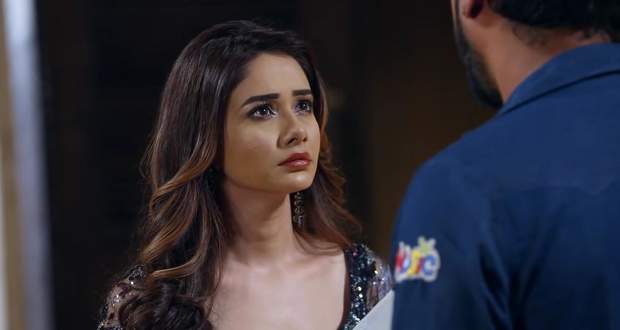 Today's Kumkum Bhagya 19 April 2021 episode starts with Tanu telling her friend Netra that she will gain all the apathy from the media and that Abhi will be forced to marry her.

Netra asks her if she was raped while Tanu disconnects the call and says that she is not raped.

Tanu says that she will not leave Abhi as she wants to see Pragya in the same pain that she had gone through 21 years ago and plans to get Rhea on her team.

Aaliya tells Pragya to leave from there while Baljeet also agrees with her and Pragya leaves.

Dadi confronts Aaliya and says that Abhi must feel bad when he comes to know about this while Aaliya shouts at her.

Baljeet shots back and tells her to not forget that she can shout to.

Meanwhile, Saritha confronts Prachi and asks her why Ranbir is marrying Rhea even though she sees love for her in Ranbir's eyes while Pragya comes there.

Pragya retells everything after which Saritha says that it is good Pragya is thrown out.

Pragya gets shocked while Saritha explains that Pragya always gets blamed and tells her to forget Abhi.

Tanu comes to police station and confronts Abhi for choosing Pragya over her.

Abhi praises Pragya and says that he will choose her over and over again and that she will get him out of jail.

Saritha talks bad about Abhi while Pragya defends hm after which Saritha says that it was a trick to bring out her inner strength.