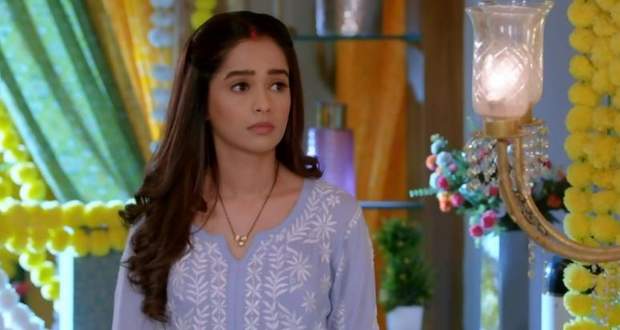 Today's Kumkum Bhagya 19th April 2022 episode starts with Rhea releasing Nick and asking him to get out of the house from the backside after capturing Sahana.

Nick runs for his sake while Vikram spots him and shouts for Ranbir, Prachi, and others to come to the living room.

Ranbir rushes after hearing Vikram shout while Rhea pretends to be attacked by Nick and acts like she has got hurt.

Meanwhile, Nick puts a knife at Prachi and takes her with him without knowing that it is Prachi due to the darkness.

Ranbir searches for Prachi in anxiety as he does not see her anywhere with the family members.

Coming outside and after putting Prachi inside the taxi, Nick notices Prachi’s face and shudders in nervousness as he hears Ranbir’s warnings from inside.

However, Rhea calls Nick to find out his position when Nick informs her about taking Prachi by mistake.

Before Rhea bursts out in anger, Nick tells her that he will execute their decided plan of killing Prachi now as he has got hold of her.

Rhea agrees but gets annoyed as Nick demands his money to be delivered within 1 hour to his sent location, or else he will expose Rhea.

Suddenly Ranbir hears the sound of a car and runs outside to chase Nick’s car with Prachi in it but fails to do so.

The family members get nervous about Prachi’s whereabouts while Pallavi continues to blame Prachi for their current situation.

Rhea tells Aaliyah about Nick’s demand and decides to wait outside as Aaliyah passes her the bag with the cash inside it.

As Sahana comes outside to check upon Ranbir, Rhea distracts her from there so that she can get the bag easily from Aaliyah.