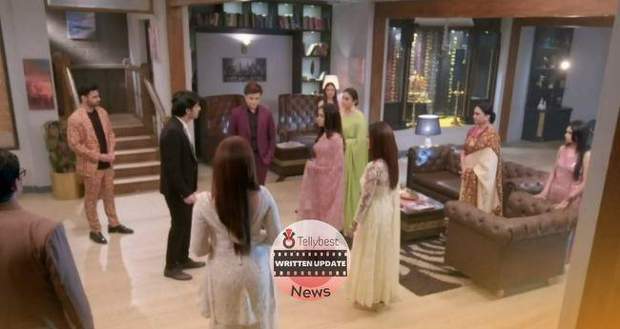 Today's Kumkum Bhagya 19th August 2022 episode starts with Sid confessing to everyone that he is not the father of Prachi’s child.

Prachi and Ranbeer take a breath of relief but Rhea can not digest that she is being insulted by Sid since Sid blames her for all the drama she has created regarding Prachi’s child.

He calls her the worst sister and the worst wife.

Sid further says that the relationship between Prachi and him is as pure as that between friends, there is no chance this could happen.

This triggers Rhea and she screams at him for insulting him and says that he has no right to say that to her. She brings out the hotel room receipt and photos.

She loudly asks him if Ranbeer is not the father and who is, and Sid exasperatingly announces it is his child.

On this Prachi and Ranbeer get bewildered and Prachi slaps him hard. She asks Sid to stop lying but Sid says her to stop and give up hiding since the truth is out.

On this Ranbeer hits him hard and punches his face. The fight leads to heavy injury to Sid’s head.

Ranbeer was about to kill him with a wine bottle in his rage when Prachi stops him.

Everyone starts listening to Sid’s story, where he explains he had a crush on Prachi since the first day he met her but never intervened between Prachi and Ranbeer.

However, when they got separated and met in Bangalore Prachi and Sid were only left for each other.

Ranbeer pulls him by the collar and punches him but before anything else could happen Pallavi asked Vikram to take away Sid and Rhea to take care of Ranbeer.

Rhea takes Ranbeer to the room and begins bandaging him which Ranbeer lets her. He tells her his hatred toward Sid and Rhea complies.

Aliya watches them from the door and thinks that even though Rhea is Pragya’s daughter she still has Aliya's characteristics.

Meanwhile, Prachi cries her eyes out in her room when Shahana enters and tries to console her but Prachi only cries and asks her why everyone has a problem with her and her child.

© Copyright tellybest.com, 2020, 2021. All Rights Reserved. Unauthorized use and/or duplication of any material from tellybest.com without written permission is strictly prohibited.
Cached Saved on: Saturday 1st of October 2022 09:13:43 PMCached Disp on: Thursday 6th of October 2022 03:46:00 PM