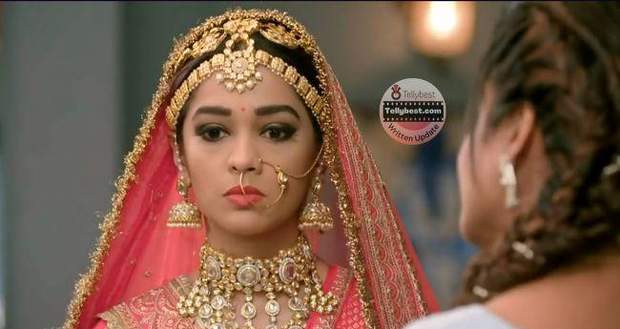 Today's Kumkum Bhagya 19th December 2022 episode starts with Aryan complementing Vikram's dress and getting scolded by him for acting smart.

Vikram asks Aryan to stop acting sly and gets surprised when Aryan tells him that he also wants to get married.

Just then, Mili comes there and hugs Aryan from behind surprising him.

Aryan's smile drops on seeing Mili while Vikram teases him that she has come at the right moment.

Vikram tells Mili that Aryan wishes to have children which shocks Aryan.

Aryan comes after Vikram but bumps into Dida while trying to walk through the crowd.

Dida scolds Aryan for walking like a blind person but notices Aliya bumping into Pallavi and understands where Aryan gets that trait from.

Alia notices Ranbir smiling while staring at his phone and wonders what Ranbir might be watching.

Ranbir looks up after he hears the guests saying that the bride has entered the room.

Prachi comes with Rhea by her side and stops in front of Ranbir.

Ranbir takes Prachi's hand and walks toward the marriage Mandap.

Thinking that Ranbir is planning to leave the wedding with her, Prachi passes by the Mandap while Ranbir stops in front of Siddharth.

Everyone stares at Prachi with shocked eyes while she realizes that Ranbir is not trying to take her out of there.

Ranbir stares at Prachi with empty eyes while tears make their way from Prachi's eyes.

Prachi jerks away from Ranbir's hand as he tries to wipe off her tears but Ranbir still cups Prachi's face and tries to comfort her.

Rhea comes to Prachi and asks her to go to the Mandap as Siddharth is waiting for her but Ranbir stops her.

Ranbir tells Rhea that he will take Prachi to the Mandap and proceeds to lead her by holding onto Prachi's hand.

Prachi sits beside Siddharth on the Mandap and the wedding rituals start at once.

The priest asks Prachi and Siddharth to stand up for the Varmala.

As Prachi's turn arrives to put the garland on Sid, she trips making the garland land on Ranbir.

Prachi and Siddharth complete their Varmala ritual while Sahana takes Aryan with her to a corner and asks him if he is with her or not.

Aryan happily says that he is always willing to be with Sahana but gets beaten by her.

Sahana tells Aryan an idea to stop the wedding which impresses Aryan and he agrees to help her in executing the plan.

Aryan and Sahana plant themselves around one of the pillars of the mandap and try to shake it so that it falls.

Coincidentally, the pillar falls on Rhea leading to a cut on her forehead which shocks everyone including Prachi, and she runs to Rhea to help her.

The family members decide to take Rhea to the hospital despite Alia and Rhea requesting that they should complete the marriage first.

At the hospital, the doctor decides to treat Rhea but asks why so many people have come there.

Alia questions the same to which Sahana replies that Prachi is worried about Rhea as she is her sister.

© Copyright tellybest.com, 2022, 2023. All Rights Reserved. Unauthorized use and/or duplication of any material from tellybest.com without written permission is strictly prohibited.
Cached Saved on: Wednesday 25th of January 2023 08:47:03 AMCached Disp on: Sunday 5th of February 2023 04:19:38 AM