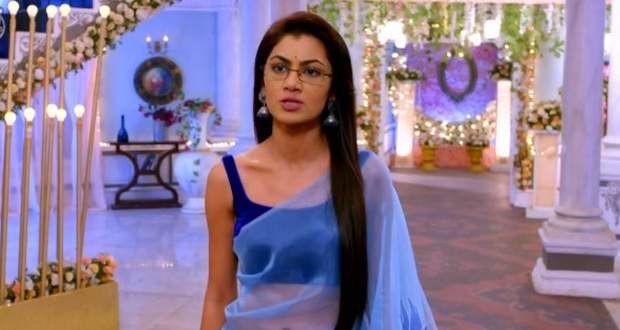 Today's Kumkum Bhagya 19 January 2021 episode starts with Baljeet and Saritha deciding to go to the temple and leave.

Inspector tells Aaliya and Meera that they are under arrest while Abhi asks Pragya what is her problem.

Pragua says she can't stand wrong happening while Abhi says that she just wants him in her life.

However, Pragya says that she would never want to live with the person who mocked and ridiculed her feelings.

Abhi says that she never understood him.

Abhi says that nothing can stop him from marrying Meer and sits with her in the Mandap.

Police try to arrest Abhi while Aaliya tells that nothing illegal is happening and tells everyone to wait for a minute and goes.

Elsewhere, Sahana manages to convince Pragya into staying for Jai and Palak's wedding.

It is seen that Baljeet and Saritha are also at the same temple.

Prachi calls Rhea while a servant sees Rhea's cell phone and wonder's where is Rhea.

Another servant tells him that he saw Rhea going to the storeroom.

Pragya denies ever signing on divorce papers while Aaliya tells her to remember when they met outside the Hoshiyarpur Police Station.

A flashback shows the lady constable refusing to file Prachi's missing complaint and throws them out.

Aaliya comes there and shows her a video of Prachi.

Aaliya gets her to sign on the property document so that she can never claim for it in the future.

She signs and Aaliya leaves while a car drops off Prachi.

Aaliya thinks in a car that she got Pragya to sign on divorce papers and not on property papers.

Aaliya makes up a fake story of Pragya signing on divorce papers for property papers which breaks Abhi's heart.

Police leaves while Abhi sits back in the Mandap.

Pragya destroys everything in the Mandap.

Elsewhere, the servant frees Rhea from Storeroom and gives her the phone.

Aaryan finds a priest and tells to fo Ranbir's wedding.

The priest tries to tell him that he does funeral rituals but Aaryan forcefully takes him away.

Upcoming Kumkum Bhagya episode update: Abhi tells Aaliya to not interfere between him and Pragya.