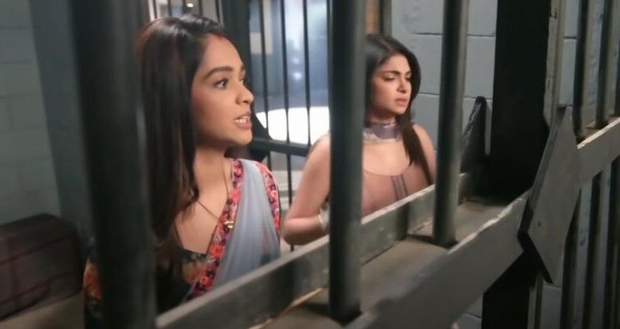 Today's Kumkum Bhagya 19 Jan episode starts with Ranbeer knowing about the pregnancy from the lady in the jail.

He congratulates Sahana thinking that she is the one who is pregnant, Prachi smiles through sadness seeing Ranbeer smiling.

While talking, Ranbeer starts to cough suddenly, Prachi gets concerned but Ranbeer tells them it is because he is excited.

Sahana stares at Prachi with nervousness and a questioning look, Ranbeer was about to ask Sahana about her pregnancy but the police interrupt them by asking them to get out as their bail is done.

Ranbeer talks with the lawyer and thanks to him, Prachi and Sahana leave with Ranbeer.

Meanwhile, Pallavi and Aaliyah return from their shopping for the Lohri the next day, Rhea welcomes them with excitement.

Vikram jokes with Pallavi making all laugh, Pallavi hands over the gifts to Vikram, Daljeet, and Neeti.

Later, the family members gossip and make plans for the festival the next day, as it is Rhea's first Lohri after her marriage with Ranbeer.

Rhea asks Pallavi where Ranbeer is, Daljeet asks them why they still have not told her about Ranbeer.

Pallavi somehow distracts Rhea's mind by making excuses and hides the fact that Ranbeer has gone to Prachi to the police station.

Rhea goes to help Neeti, Pallavi argues with Daljeet regarding Prachi and Ranbeer, Aaliyah gets worried.

On the other hand, Ranbeer tells Sahana to stay with them in their house, for the time being, and they reach the house.

Ranbeer tells Sahana about his three dreams but suddenly gets a hazy flashback of him telling the same thing to Prachi before.

Prachi dismisses Ranbeer's words about him saying this to her before and tells him that his dreams are non-sense to her.

Ranbeer snaps on hearing Prachi and both start to argue again, Ranbeer tells Prachi that she does not have a heart anymore.

With the argument getting more serious, Ranbeer declares that he will stop loving and caring for Prachi from now on.

Upcoming KKB episode updates: Ranbeer tells Prachi that he will go so far from her that she will not even feel his love anymore.