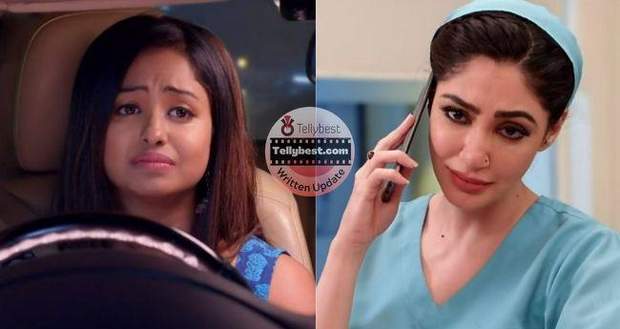 Today's Kumkum Bhagya 19th January 2023 episode starts with Alia waiting for Madan to bring her a mobile phone with which she can start her plan of blackmailing the Kohli family.

The sidekick of Madan asks Alia to call from his mobile and hands it over that to her but Alia throws the phone away.

Madan comes back with a new phone but gets scolded by her for carrying phones as the police can track their locations through them.

Alia hears footsteps and hides along with Panchi and the two goons working for her.

Rhea enters the place with police officers and asks Alia to come out from wherever she is hiding.

Alia remembers the past when Rhea used to cling to her for help and leaves that place with Panchi with a sour face.

After getting out, Alia calls Rhea and tells her that she did very wrong by going against her and siding with Prachi and Ranbir.

Rhea asks Alia to punish her instead of Panchi as she is an innocent child who knows nothing.

Alia assures Rhea that she will not spare anybody this time and destroy everyone’s happiness forever.

Alia bids goodbye to Rhea and hangs up after saying that she will never call her again.

Meanwhile, the nurse gives a heavy dose of medicine to Prachi and tells Ranbir that it will help her to sleep.

Ranbir sits by Prachi’s side as she slowly drifts into sleep and tells her that she will soon feel better.

As Ranbir leaves, Prachi gets up as she never swallowed those medicines, and gets a call from Alia.

Alia congratulates Prachi for becoming a mother and asks her if she wants to meet her baby once.

Prachi begs Alia to leave Panchi and says that she will not spare her if something happens to Panchi.

Alia says that she called her for that purpose only and asks Prachi to come to her location alone if she wants Panchi back.

Prachi comes to the living room and hears Ranbir shouting at Rhea as she let Alia escape from all the possible hideouts.

Ranbir tells Rhea that if anything happens to his daughter because of her and Prachi’s Alia Bhuji, then he will not forgive anyone.

Prachi decides to go by herself and leaves in her car while a police officer spots her going away.

Ranbir and others get shocked to know that Prachi left to meet Alia and get a call from Alia asking them to come as well.

Ranbir asks the police to stay back as he cannot take any risk with Panchi’s life.

Prachi reaches the location and asks Alia to come out and return her baby to her.

Alia appears but does not hand over Panchi to Prachi and asks Prachi to sign some papers if she wants to save her daughter.

With a gun held toward her, Prachi signs the property papers and divorce papers without thinking a bit.

However, as Alia was about to hand over Panchi, Ranbir reaches there and starts requesting Alia to hand over their daughter.

The goons spot police hiding and tell Alia that Ranbir has brought police with him which scares Alia.