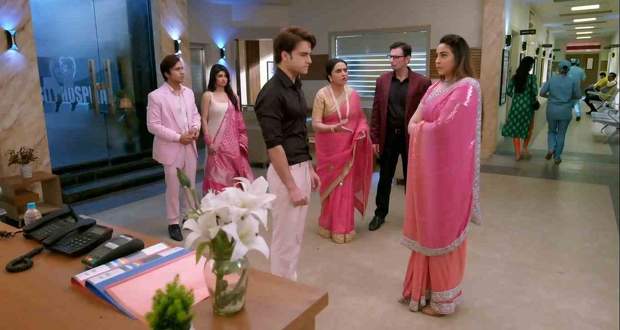 Today's Kumkum Bhagya 19th July 2022 episode starts with Prachi thinking about the series of events that took place in her life and feeling distressed.

Prachi feels guilty about snatching away Rhea’s happiness with her baby and Ranbir and decides to leave the house forever.

After calling Sahana and letting her know about her plan, Prachi leaves the hospital room and vanishes.

Dida spots Sahana rushing outside of the hospital and tries to stop her but Sahana tells Dida that she will tell her later.

Meanwhile, in the visitors’ room, Alia continues to instigate Pallavi about not being able to control her family and son.

Dida comes in and tells everyone how she spotted Sahana rushing outside and suspects that something bad has happened to Prachi.

Seeing Alia start over again about Prachi, Vikram says that Alia should have stopped the marriage if she wanted Rhea’s happiness.

Ranbir agrees with Vikram and reminds everyone how Rhea married Ranbir by threatening him with her suicide attempts.

After not finding Prachi anywhere in the hospital, Ranbir runs in the rain and calls out for Prachi desperately.

Ranbir decides to call Sahana after he fails to find Prachi anywhere on the streets.

Ranbir begs Sahana to tell him where Prachi is and gets to know from her that Prachi is packing her things at home and is going to leave soon.

At home, Prachi packs her things and takes Ranbir’s photos with her while shedding tears.

Trying to hurry up to catch up with Prachi, Ranbir leaves his taxi and starts running towards the house.

Elsewhere, Rhea prays that Prachi and Ranbir miss each other before meeting.

Ranbir reaches home and runs to Prachi’s room only to find it empty.

However, Prachi appears from the bathroom making Ranbir feel relieved.

Getting on his knees, Ranbir asks Prachi not to leave the house for the sake of their child.

© Copyright tellybest.com, 2020, 2021. All Rights Reserved. Unauthorized use and/or duplication of any material from tellybest.com without written permission is strictly prohibited.
Cached Saved on: Saturday 1st of October 2022 01:00:22 AM