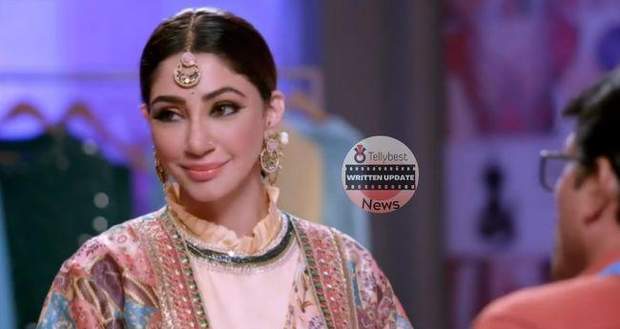 Today's Kumkum Bhagya 19th October 2022 episode starts with Siddharth telling Alia that he wants to meet Mihika and if she denies then he will not stop risking the truth.

Alia tells Sid that she will contact her men and take him to meet Mihika but Rhea resists the idea.

Alia explains to Rhea that Sid’s eyes showed valor and desperation, which can become difficult for them.

Instead, Alia tells Rhea that she will ensure that Sid does not return to the house and meets his death on his way.

Rhea gets impressed on hearing Alia and feels relieved that both Prachi and Sid will be gone on the same day.

Prachi roams by herself with a sulky face after seeing Ranbir flirting with Neha while Sahana rubs salt on her jealous wound.

Sid meets them and says that Alia and Rhea have promised to let him meet Mihika but only if he does the arti with Prachi.

After the priest comes, everyone gathers around for the puja and waits for their turn for the arti.

As Sid tries to take the arti thali for himself, Ranbir stops him and glares at him which makes Sid step down.

Ranbir and Prachi do the arti together while Rhea burns with jealousy and pushes her way to be with Ranbir.

However, Ranbir leaves and Rhea has to do the arti with Sahana which infuriates her.

After the puja gets over, Prachi goes around the house lighting the diyas while Rhea and Alia watch her from their room.

While discussing their plan to burn Prachi to death, Aryan comes into their room to take back his charger.

Meanwhile, Ranbir calls Neha to come to him so that he can make Prachi jealous.

Seeing Ranbir with Prachi, Rhea rushes outside as Ranbir will sacrifice his life gladly once he sees Prachi in any danger.

Ranbir pretends to be very close to Neha which irritates Prachi to the max and she interrupts their conversation.

Prachi tells Neha that her father is calling her to which Rhea also agrees as she also cannot watch Ranbir flirting with another girl.

Before Neha leaves, Prachi tells her that she is Ranbir’s wife, angering Rhea.

Rhea approaches Prachi from behind as she lights up the diyas oblivious to her special dupatta.

© Copyright tellybest.com, 2022, 2023. All Rights Reserved. Unauthorized use and/or duplication of any material from tellybest.com without written permission is strictly prohibited.
Cached Saved on: Monday 21st of November 2022 07:27:22 AMCached Disp on: Friday 9th of December 2022 04:13:09 AM