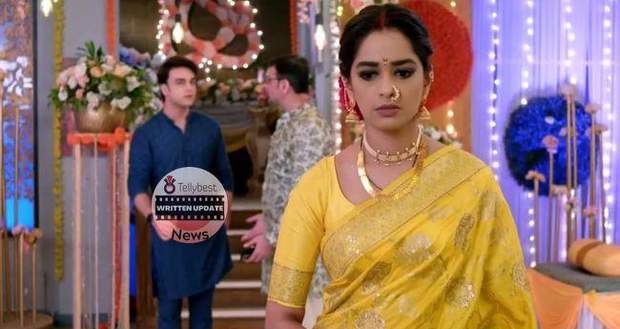 Today's Kumkum Bhagya 19th September 2022 episode starts with Aryan searching through Dida’s room for a charger while Dida feels nervous about getting caught by the goons.

Dida asks Aryan about what he is searching for, to which he answers that he is looking for a charger to call the police.

Dida gives Aryan her own charger but it does not fit with Aryan’s phone.

Jokingly, Aryan makes fun of Dida for using a vintage mobile and gets scolded by Dida.

Dida says that her mobile is 10 times better than Aryan’s as it works for up to 3 days after being charged once.

After a bit more searching, Aryan finds his own mobile charger from Dida’s bed and puts the phone in charge.

However, after dialling the police number, Aryan remembers that his phone does not have the balance to call anybody.

Dida grows furious on hearing that and begins to beat Aryan up who runs away for his life.

Elsewhere, Rhea boils with anger remembering Sahana’s words and encounters Alia who asks her the reason behind her anger.

Alia coins a plan to get rid of both Sahana and Prachi through the goons and asks Rhea to gather Ranbir and Prachi.

Rhea meets Rahul and proposes to him money to act like he is robbing but letting Rhea be the hero who will save everyone.

On the other hand, Prachi asks Ranbir to let go of her hand as she does not want him to follow after her.

Ranbir tells Prachi that he is not holding her hand because of romantic feelings but because she is extremely stupid.

Prachi gets infuriated on hearing Ranbir and frees her hand from his grip.

Ranbir tries to call Prachi his dear friend but Prachi says that she is his wife and will not settle for anything else.

As Ranbir reminds Prachi about their love story, Prachi remembers their past and distances herself from Ranbir.

Prachi asks Ranbir to go away but Ranbir comes closer to Prachi while holding her face in his hand.

Back in the living room, Pallavi blames Vikram for not inviting his police friend and screams at the goons as they interrupt her.

One of the goons shows sympathy to Vikram on seeing his condition after getting suppressed by Pallavi and asks him how he handles his wife.

Vikram shares his sorrow with the goon making Pallavi fume with rage.

After Rahul brings Rhea to the living room with a gun pointed at her, the other goon shoots a bullet in the air and asks everyone to come out.

Prachi, Ranbir, Sahana, Aryan, and Dida come out while Rahul asks Alia to hand over her necklace.

As Rhea tries to speak, Rahul exposes her scheme of bribing him in front of the whole family.

© Copyright tellybest.com, 2020, 2021. All Rights Reserved. Unauthorized use and/or duplication of any material from tellybest.com without written permission is strictly prohibited.
Cached Saved on: Saturday 1st of October 2022 09:40:06 PMCached Disp on: Thursday 6th of October 2022 03:21:28 PM