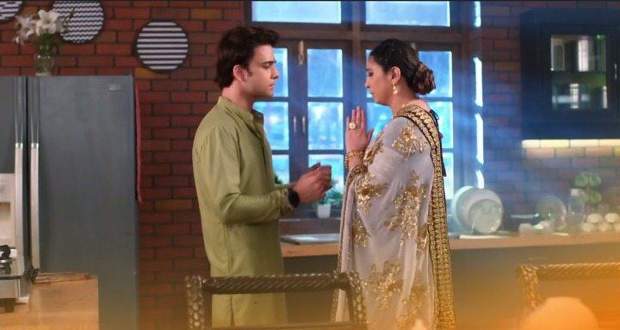 Today's Kumkum Bhagya 1st August 2022 episode starts with Ranbir and Pallavi talking with each other with Ranbir asking Pallavi why she lied to Prachi.

Pallavi tells Ranbir that she was trying to convince Prachi to eat the ladoos as she has to take care of her health.

Pallavi says that she is responsible for Ranbir’s doubt as she has never been a good mother to Prachi.

However, Pallavi promises Ranbir that she will mend all her mistakes and shares a hug with her son asking him to take care of Prachi.

Ranbir joins Prachi, Sahana, Millie, and Aryan to play the game of truth and dare where Millie chooses dare first.

Trying to put Millie in a tough spot, Aryan asks her to kiss him which surprises everyone, especially Sahana.

Millie approaches Aryan to kiss him while Sahana’s smile fades due to slight jealousy but the kiss gets limited to only a forehead one.

Next, Sahana chooses the truth and Prachi asks her who her first boyfriend was which makes Aryan uncomfortable.

Sahana denies having a boyfriend while Aryan burns in jealousy.

However, Aryan also gets asked the same question as Sahana by Ranbir to which he answers that he had a girlfriend in college but she was unaware of it while staring at Sahana.

The bottle points at Prachi next and she chooses truth in which Ranbir asks her whether she still loves him.

Hearing Ranbir’s question, Prachi gets silent as she still loves Ranbir the same way she did in the past.

Suddenly, it starts to rain which makes all of them run inside in hurry.

Millie asks Aryan where she should stay for the night and Sahana offers her to sleep in her room.

Ranbir comes after Prachi and gets slapped by Prachi’s hair mistakenly.

Trying to tease Prachi a bit, Ranbir tells her that she is trying to wound him through her eyes and hair.

Prachi gets angry but immediately bursts into laughter on seeing Ranbir fall to the floor.

While arguing with each other, Prachi pulls Ranbir closer to her by holding onto his collar with their lips almost touching.

Before leaving Ranbir comes from behind and kisses Prachi on her cheek taking her off-guard.

Elsewhere, Rhea cries in front of Aryan and reveals that she is also pregnant with Ranbir’s child.