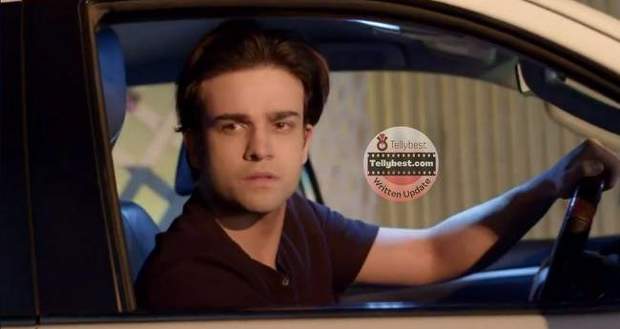 Today's Kumkum Bhagya 1st December 2022 episode starts with Rhea and Alia keeping their eyes on Ranbir as he roams around the building searching for Prachi and Siddharth.

Rhea tries to call Ranbir and ask him to leave the place but Alia stops her from doing so as she cannot present an understandable excuse to Ranbir.

Alia asks Rhea what she will tell Ranbir about her being there and asks why Ranbir has to be in the wrong place at the wrong time.

Ranbir thinks about hearing Rhea's voice somewhere but dismisses his thought thinking it is his imagination.

Meanwhile, Prachi sulks while thinking about Ranbir's comment regarding her and Siddharth.

Shahana asks Prachi why she is so angry at Ranbir and tries to justify Ranbir's feelings of insecurity as he loves her.

Prachi tells Shahana that where there is love there is no place for mistrust and suspicion and she did not expect Ranbir to suspect her relationship with Siddharth again.

At the same time, Alia and Rhea think about how they can bring Ranbir outside as he will not leave the place until he finds Prachi.

Rhea tells Alia that Prachi will not leave without taking Mihika with her which will eventually bring out their secret of threatening Sid through Mihika.

Alia coins out of a plan that they should light up the place with fire after they make everyone unconscious and take out Ranbir with them.

Riya hugs Alia dearly after hearing her plan and asks the goons to proceed with it to ensure Ranbir's safety.

In the meantime, Ranbir gets inside the building again and discovers Mihika with the masked man, making him panic internally.

Ranbir tries to act full and jokes with the masked man, saying he has no intention of fighting him and wants to take Mihika with him back home.

The Mask man brings out a knife and tries to threaten him but Ranbir kicks off the knife from his hand with a clever move.

As the masked man struggles to find his knife, Ranbir loosens the ropes of Mihika and tries to escape with her.

However, the masked man finds his knife and tries to stab Ranbir making him scream loudly.

After they find Mihika in a safe and sound condition, Prachi, Sid, and Shahana try to escape but Ranbir stops them by saying that no one cares about him.

Ranbir asks the masked man to stab him with his knife but he remains busy taking the knife out of the wood where it got stuck.

After Prachi gives a scolding to Ranbir, they try to get out of the building but get caught by the goons who make them unconscious by making them smell chloroform.

Alia and Ria take Ranbir outside with them while leaving the others inside to burn and die.

After placing Ranbir in his car, Alia goes inside with the goons and spreads kerosene all over the place lighting the matchstick to start the fire.

The fire starts to spread everywhere with everyone unconscious on the floor while Ranbir starts to regain his senses slowly.

Alia and Riya go off to their car to give money to the goons while Ranbir starts to open his eyes.

© Copyright tellybest.com, 2022, 2023. All Rights Reserved. Unauthorized use and/or duplication of any material from tellybest.com without written permission is strictly prohibited.
Cached Saved on: Wednesday 25th of January 2023 10:21:05 AMCached Disp on: Sunday 5th of February 2023 03:58:06 AM