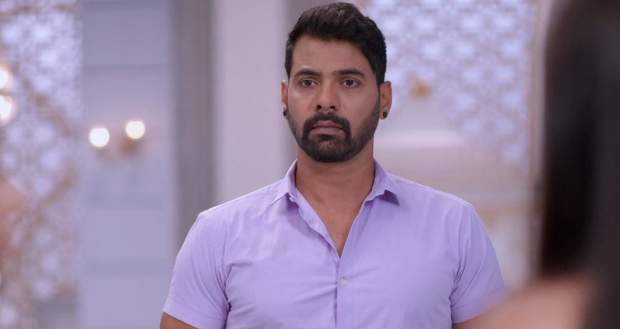 Today's Kumkum Bhagya 1 February 2021 episode starts with Ranbir telling Aaryan that he can't marry Prachi by betraying her and gives the garland to Jai.

Prachi gets a call and she moves to attend it while some of the sindur that Ranbir is holding falls on her hairline.

She picks up Rhea's call who informs her that someone wants to kill their parents and Prachi assures that she will find them and cuts the call.

Elsewhere, Pragya goes outside of the old couples house in anger while Abhi tries to get her to talk to him but fails when she asks him if he remembers when they first met.

Abhi tells her that he wants to remember all the happy moments of their life and hugs her.

Meanwhile, Ranbir reveals the truth to Prachi that he had lied to Rhea to make her leave while she gets angry with him and leaves in a taxi with Sahana.

Meanwhile, two shooters plan to team up and kill Abhi while the third shooter comes other and mocks them after which the first shooter kills him.

The other two shooters come there while the former shooters tell them that they will give Abhi and give the prize money to them and they agree.

At the same time, the old lady puts a single plate of food in from of Abhi and Pragya while telling them that their love will increase by eating from the same plate.

Ranbir feels tensed while others try to pacify him that they will him in his marriage as Aaryan comes from behind and says that he got the last rituals of the marriage done which shocks Ranbir.

The old lady tells Pragya to apply Shagun Mehandi while she remembers Baljeet and Saritha and gets emotional.

© Copyright tellybest.com, 2020, 2021. All Rights Reserved. Unauthorized use and/or duplication of any material from tellybest.com without written permission is strictly prohibited.
Cached Saved on: Monday 19th of April 2021 11:17:28 AM