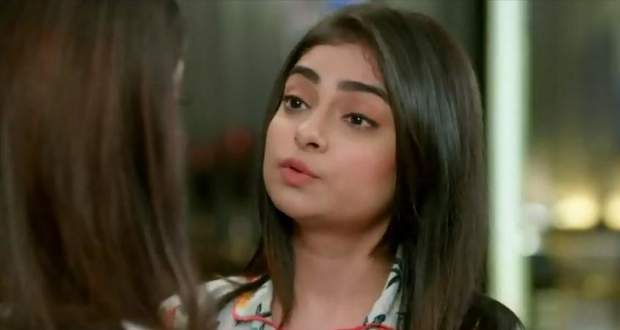 Today's Kumkum Bhagya 1st July 2022 episode starts with Sahana trying to calm down Prachi as she huffs in anger due to Ranbir.

Prachi tells Sahana how she always loses her cool as soon as she stands in front of Ranbir.

As Sahana tries to make Prachi understand that she gets very angry with Ranbir and does not give him the chance to explain, Prachi shuts her down.

Prachi reminds Sahana that Ranbir was the one who suspected her of being characterless and is now the father of Rhea’s child.

On seeing Prachi long for her mother, Sahana lends her own lap to Prachi to lie down and gives some moments of peace.

Meanwhile, Ranbir thinks about Prachi pushing him away earlier and blames himself for ruining things.

Ranbir prosecutes himself for doubting Prachi with Sid, getting drunk with Rhea, and not being able to give Prachi her rights.

Suddenly, Ranbir remembers Dida doing the Nazar ritual on Rhea and decides to do it on Prachi on his own.

Ranbir spots Prachi cutting vegetables to prepare a sandwich for herself in the kitchen and watches her.

As soon as Prachi gets hurt by the knife, Ranbir runs to her and slips her cut finger into his mouth to suck the blood out.

Ranbir makes Prachi sit on the chair and prepares the sandwich by himself despite Prachi resisting to take his help.

Without letting Prachi touch the food, Ranbir offers to feed her which Prachi finally agrees to do as she is hungry.

However, as Prachi remembers her past moments with Ranbir, she stands up and leaves the kitchen.

Prachi comes to her room and asks herself to come to her senses and not get fooled by Ranbir’s smooth flirting skills.

Prachi reminds herself how Ranbir suspected her with Siddharth, then married Rhea while she was gone, and now has made Rhea pregnant.

While Prachi sleeps, Ranbir comes in and does the Nazar ritual on her to protect her and their child from any bad omens.

Ranbir spots Rhea going into Alia’s room and tries to eavesdrop but fails as they move into the storage room.

After listening to Rhea about how she begged and requested Prachi to leave the house, Alia assures Rhea that Prachi will be gone by the next day.

© Copyright tellybest.com, 2022, 2023. All Rights Reserved. Unauthorized use and/or duplication of any material from tellybest.com without written permission is strictly prohibited.
Cached Saved on: Monday 21st of November 2022 06:25:56 PMCached Disp on: Saturday 3rd of December 2022 03:20:27 PM