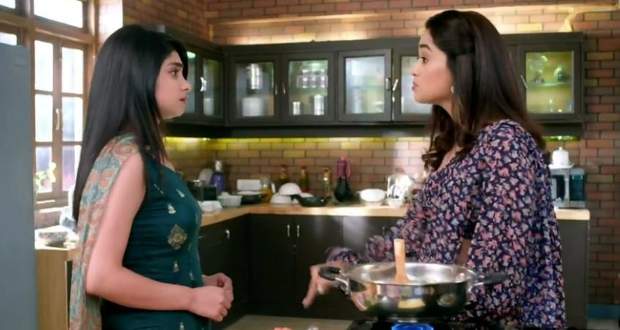 Today's Kumkum Bhagya 1st June 2022 episode starts with Rhea bumping into Sahana and starting to insult her without any reason.

Sahana stays silent as she remembers Prachi telling her how Rhea saved her life.

While passing, Rhea spots Ranbir cooking in the kitchen and asks him what the matter is.

Ranbir tells Rhea that he is very happy today and wants to share his happiness by making something sweet.

Rhea asks Ranbir why he hugged her back at the hospital to which Ranbir refuses to disclose any information.

Ranbir assures Rhea that Prachi will tell her the matter herself.

However, as Rhea pressurizes Ranbir, he tells Rhea that Prachi wants to buy the house they earlier lived in.

Rhea presumes that Prachi is moving out of the Kohli mansion and gets happy by herself.

Later, Ranbir comes into Prachi’s room with his handmade shira.

Prachi asks the reason for making the dish to which Ranbir lies that his startup has turned out to be great.

Giving the excuse of the startup, Prachi and Ranbir congratulate each other and feed the shira to each other.

Ranbir gets emotional in his happiness and hugs Prachi tightly in his arms.

After making Prachi sleep, Ranbir bids good night to her and leaves the room.

The next day, Alia tells Pallavi about Ranbir hugging Rhea and indicates there is a growing closeness between him and Rhea.

Ranbir comes along with Prachi and everyone and announces that he is going to receive happy news very soon.

Ranbeer feeds the family members jalebis one by one and leaves Rhea's jalebi on her plate while feeds Prachi by his own hand.

Ranbir announces that there will be a party that night in the Kohli mansion but gives it the excuse of business.

As Ranbir leaves without wishing Prachi a happy anniversary, Prachi acts grumpy herself.

Sahana notices and tries to calm down Prachi but she refuses to forgive Ranbir as he has forgotten the day he married her.

On the other hand, Ranbir tells his employee that he is going to get a divorce from Rhea by that day.

© Copyright tellybest.com, 2022, 2023. All Rights Reserved. Unauthorized use and/or duplication of any material from tellybest.com without written permission is strictly prohibited.
Cached Saved on: Wednesday 25th of January 2023 09:42:44 AMCached Disp on: Sunday 5th of February 2023 01:55:59 PM