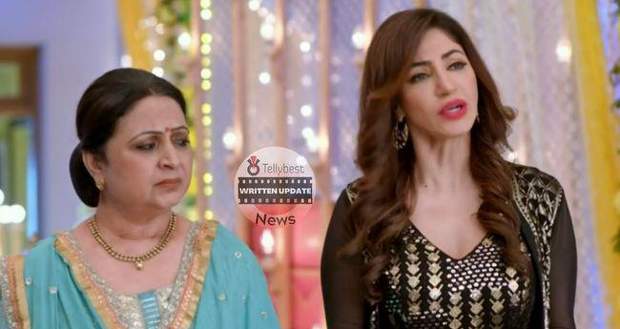 Today's Kumkum Bhagya 1st November 2022 episode starts with Prachi assuring Vikram she knows that everyone loves her and will go to war for her if it ever came to that. Vikram blesses her and tells her to always remain happy.

Rhea and Alia are disgusted looking at the scene and they go to their rooms; the rest of the family also retires for the night.

Sahana asks Aryan with concern as to why he shouted at Alia while Aryan warns her not to interfere.

Meanwhile, Prachi goes to check on Dida to see if she is asleep or not but she finds Dida lying awake on her bed.

Dida asks Prachi to come inside her room and talks to her about the events that transpired downstairs.

Prachi tells Dida about the tailor’s testimony about Alia and Pallavi and Dida is shocked to hear Pallavi’s name.

However, Prachi reassures Dida saying that Pallavi could never hurt her as she loves her.

In the meantime, Ranbir is still searching for the tailor when suddenly he comes before him and starts fleeing, but before Sid can catch him, the tailor sits in a taxi and drives away.

Yamini reassures Sid saying that she will catch ahold of him anyhow.

However, after Ranbir leaves Yamini says that she now has started to suspect Pallavi as well.

Just as Aryan starts opening up to Sahana, Sid arrives and tells everyone that the tailor has escaped. Rhea thanked God after hearing that.

Rhea then goes back to Alia’s room bubbling with rage. Rhea and Alia are frustrated at Prachi as all their plans to separate Prachi and Ranbir are failing continuously.

Rhea pleads before Alia to not create any more ruckus as the blame would fall on her.

Alia calls someone who would defame the Kohli family, which in turn will enrage Pallavi who will then oust Prachi.

Alia responds by telling Rhea to give her pictures of Prachi and Sid to prove their point.

The next morning everyone gathers at the dining table, where Vikram and Dida inquire about Pallavi’s health.

As everyone starts having breakfast, Vikram starts reading the newspaper where the headline states about Prachi and Sid’s affair, which Vikram fails to see.

Seeing that Vikram hasn’t noticed the sensational headline about Kohli’s, Alia snatches the paper from Vikram’s hands and starts loudly reading the report about Prachi and Sid’s illicit affair.

At the same moment, Rhea tells everyone to check their phones for a video showing Prachi and Ranbir dancing whose title reads, "This is the shameless daughter-in-law of the Kohli’s."

© Copyright tellybest.com, 2022, 2023. All Rights Reserved. Unauthorized use and/or duplication of any material from tellybest.com without written permission is strictly prohibited.
Cached Saved on: Monday 21st of November 2022 04:26:50 AMCached Disp on: Saturday 10th of December 2022 02:01:04 PM