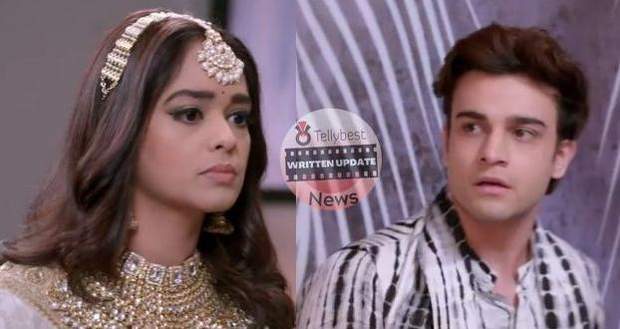 Today's Kumkum Bhagya 1st October 2022 episode starts with Ranbir coming after Prachi while she says that he is a very bad dancer after they performed together in the living room.

Ranbir asks Prachi the reason behind her sudden gush of happiness as she was in a gloomy mood before the engagement began.

Stopping in her tracks, Prachi asks Ranbir if he wants to be happy or not as she is acting all happy currently.

Ranbir replies that he wants her to be happy but not in this way which confuses Prachi even more.

Suddenly Ranbir receives a call and Prachi walks off from there without completing the conversation.

Prachi enters Rhea’s room so that she can search for any clue related to Mihika and help Siddharth and herself from the engagement.

Suddenly, Rhea comes out of the washroom, and Prachi and Sahana begin to play catch-catch with a pillow.

Rhea gets confused and Sahana answers that their childhood side was eager to play catch-catch and they could not find a more exciting place than Rhea’s room.

Rhea gives a weird look at them but freezes when Prachi asks her when Mihika is joining them at the function.

Somehow, Rhea manages to answer Prachi’s question and asks Prachi to pass her phone that was lying on the table the whole time.

Prachi and Sahana get visibly disappointed on seeing the mobile and leave the room after handing it over to Rhea.

Prachi tells Sahana that Rhea’s luck was good this time as they would have succeeded in hijacking her phone.

Just then, Pallavi comes and takes Prachi toward the living room for the ring exchange while reminding her that she wants no drama.

In the living room, Ranbir shoots daggers with his eyes at Sid and imagines beating him up so that he cannot attend the engagement.

Prachi arrives along with Pallavi and Alia with her eyes meeting with the painful eyes of Ranbir.

After the tilak ceremony, Pallavi hands both Sid and Prachi the rings and asks them to exchange them with each other.

Sid intentionally drops the ring which rolls and eventually stops at Ranbir’s foot.

Ranbir brings back the ring to Sid and asks him to make Prachi wear the ring while his eyes brim with tears.

However, Prachi gives up on acting petty and tells Ranbir that he should stop the engagement as he knows they are deeply in love with each other.

Rhea spots Prachi holding Ranbir’s hands and steps in to stop them but gets a tight slap from Prachi.

Prachi announces that Rhea is the reason that made Siddharth lie in front of the whole family that Ranbir’s child belongs to him.

Ranbir stares at Rhea with a shocked face while Rhea denies the accusation in panic.

© Copyright tellybest.com, 2022, 2023. All Rights Reserved. Unauthorized use and/or duplication of any material from tellybest.com without written permission is strictly prohibited.
Cached Saved on: Monday 21st of November 2022 08:10:08 AMCached Disp on: Thursday 1st of December 2022 12:31:50 PM