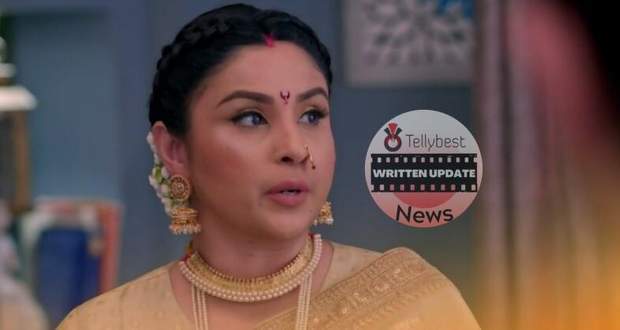 Today's Kumkum Bhagya 1st September 2022 episode starts with Rhea and Alia getting frustrated on seeing Vikram and Pallavi bringing Prachi into the house along with Ranbir.

Rhea screams in anger as things got ruined after they went to such great lengths to build misunderstandings between Ranbir and Prachi.

Seeing Rhea lose her cool, Alia asks her to stop screaming and act calmly if she wants to do something.

However, Rhea continues to blabber in anger and gets slapped by Alia to shut her mouth for one minute.

Alia says that they will do something unexpected to turn tables soon as she consoles Rhea by hugging her.

The next day, Pallavi feels sad while staring at Ranbir as she realizes that her son has lost his happiness and shine over time.

Ranbir wakes up and asks Pallavi what happened yesterday as he cannot remember anything.

Pallavi tells Ranbir that he does not need to take the stress and pats his head after placing his head on her lap.

Feeling sad, Ranbir says that he is lost in his life as Prachi, whom he loves the most, is going to become the mother of Siddharth’s child.

Meanwhile, Alia blames two servants for stealing her necklace as she saw them in the jewelry store the previous day.

The boy denies the accusation and asks Alia to stop with her imagined setups because they are poor.

Telling another servant Priya to search for the necklace, the boy challenges Alia that the necklace must be somewhere in the room.

Priya searches the room and finds the necklace behind the bed making Alia go silent.

Alia asks them to leave but the boy asks her to apologize to Priya as she aimlessly blamed them without checking.

Hearing the boy’s words, Alia gets infuriated, fires them instantly, and asks them to leave the house.

Elsewhere, Sahana stops Prachi from leaving after she wakes up and tells her not to cause a scene as Ganesha is arriving in the house.

Prachi considers Sahana’s suggestion and dresses up for the puja.

Ganesha’s idol arrives at the house and Ranbir encounters Siddharth, giving off a death stare at him.

As the arti starts, Ranbir joins Prachi in doing the arti together but leaves in the middle making Prachi feel hurt.

Rhea pushes Siddharth toward Prachi so that they can do the arti together but Prachi walks away from Siddharth.

To take revenge, Sahana pushes Rhea toward Siddharth, leading to Rhea and Siddharth doing the arti together while glaring at each other.