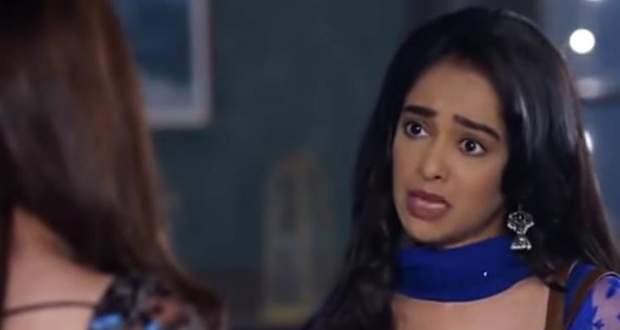 Today's Kumkum Bhagya 20 April 2021 episode starts with Aaliya talking to the lawyer while Rhea comes there and rebukes her for letting Abhi be arrested.

Aaliya promises her that she will get him out and they hug.

Pragya reaches the police station and insists the inspector let her meet Abhi but he declines.

She makes a video stating the Inspector is violating human rights as he isn't letting her meet her husband who needs his food and medicines after which the Inspector allows her to meet Abhi.

Pragya goes to Abhi and they both emotional while she consoles him saying that she will get him out.

They both feed each other food with their hands and get emotional.

Elsewhere, Prachi goes to Tanu and requests her to take back the complaint which erupts an argument between the two.

Tanu pushes Prachi but Rhea stops her from falling and stands with her against Tanu.

The goons in the lock-up insult Abhi while he tells Pragya to leave as he can't stand them talking bad about her.

Tanu tries to get Rhea's support but Rhea stands with Prachi and tells Tanu to take back the complaint and to take it as a warning.

Both the sisters fight against Tanu united while she calls security and tells him to kick them out.

© Copyright tellybest.com, 2020, 2021. All Rights Reserved. Unauthorized use and/or duplication of any material from tellybest.com without written permission is strictly prohibited.
Cached Saved on: Thursday 29th of April 2021 06:22:38 AMCached Disp on: Thursday 6th of May 2021 06:19:01 AM