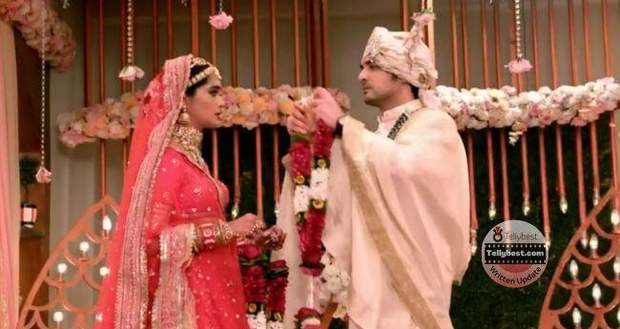 Today's Kumkum Bhagya 20th December 2022 episode starts with the family members waiting outside the doctor’s chamber while the doctor treats Rhea’s wound inside.

Ranbir intentionally pushes away Siddharth and then says sorry with a mocking smile on his face.

As Ranbir takes Sid away from the family members with him, Sahana also brings Prachi aside to discuss things.

Sid tells Ranbir that he knows that Ranbir is upset seeing him and Prachi marry each other and is sorry for everything going on.

As Siddharth asks Ranbir what he can do to reduce Ranbir’s sadness, Ranbir throws water on Sid’s face and says that one should always be punished for the deeds they actually committed.

Ranbir warns Sid that he will drive out blood if Prachi ever sheds tears after getting married to him.

Ranbir asks Sid to go away as he needs to cool his head down which is going crazy seeing Prachi and him together.

On the other hand, Sahana gives Prachi the idea of doing Rhea’s pregnancy test again in that new hospital as Alia and Rhea have no connections here.

Prachi likes Sahana’s idea but wonders how she will manage to convince everyone to conduct a DNA test again.

The doctor comes out of his chamber and informs everyone that Rhea is fine and they can take her back home with them.

Alia rushes inside to check on Rhea while Dida asks Pallavi to stand outside as Rhea just got a small cut.

Aryan asks Vikram about the pillar falling on Rhea and internally wishes that a more serious accident should have happened.

Prachi and Sahana meet with Sid and tell him about their plan to do the DNA test.

Sid says that he knows an angry young man who will help them and raises Ranbir’s name which surprises Prachi and Sahana.

Coming to Ranbir, Sid acts cool and asks Ranbir if he knows about Rhea’s affairs as her husband.

Meanwhile, Prachi acts like a worried sister and secretly collects Rhea’s hair for the test.

Sid reminds Ranbir about Rhea’s pregnancy test reports and asks him if he has read them or not.

This angers Ranbir and he announces that he wants to see the pregnancy reports of Rhea then and there.

Alia tries to protest against the decision but gives in when everyone agrees to conduct the test as it takes barely 2 minutes.

However, the doctor informs them that the lab staff is not present and will be back after 1 hour.

Pallavi decides to come back to the hospital after 1 hour and returns home to continue the marriage.

Prachi and Sid sit in the marriage mandap while Ranbir tries to fix the decorations after climbing on a ladder.

Ranbir loses his balance and falls to the floor from the ladder leaving everyone shocked.

Prachi rushes to Ranbir and starts to scold him for risking his life as he needs to look after himself while she is not around him.

© Copyright tellybest.com, 2022, 2023. All Rights Reserved. Unauthorized use and/or duplication of any material from tellybest.com without written permission is strictly prohibited.
Cached Saved on: Wednesday 25th of January 2023 10:23:29 AMCached Disp on: Thursday 9th of February 2023 05:04:17 AM