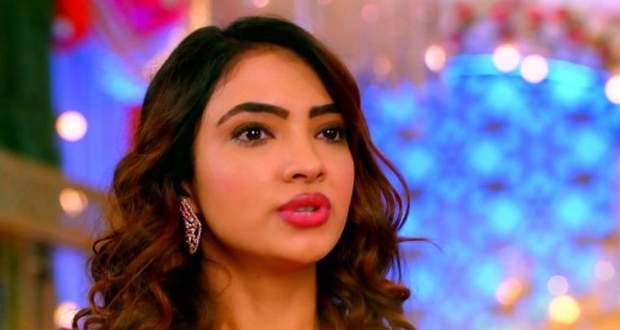 She asks him what is happening there while she sees Rhea and lies that Abhi is going to the temple to marry Pragya.

Elsewhere, Aaliya berates Pragya and asks her if she can prove that she is still Abhi's wife.

However, Abhi stops her and says that only Meera has to right to interfere in their matter which shocks Pragya.

Meera tells her to leave them alone and let them marry while Pragya argues with her.

Pragua tells Abhi that she should be sad cause he signed on the divorce papers with his own will while her's were taken by fraud.

Pragya asks him what he wanted to hear while Meera takes his arm and drags him to go to the temple.

Elsewhere, Rhea calls Shayna and tells her that everything is going as per her wish while Shayna informs her that Jai is going to marry Palak at a temple.

Rhea plans to marry Ranbir there and tells her to reach the temple.

Jai teases Sahana asking if something is going on between her and Aaryan while Ranbir gives her a lehenga and requests her to give it to Prachi.

Meanwhile, Pragya tries to go after Abhi's car but he drives off.

She tries to go inside to get Baljeet's help but Aaliya throws her out of the house.

Security helps her and fakes that Pragya broke the lock and lets her go inside the Mehra mansion.

Elsewhere, Aaryan introduces the pandit to Ranbir and others and explains to him their plan.

Pragya goes to Purab's room and Aaliya goes after her but gets sprain in her ankle.

She gets the address where Abhi is going to marry and leaves while Aaliya stops her.

Aaliya finds out that Purab gave her the address and goes to confront him.

Purab berates ans tells her that he wishes he never met.

© Copyright tellybest.com, 2020, 2021. All Rights Reserved. Unauthorized use and/or duplication of any material from tellybest.com without written permission is strictly prohibited.
Cached Saved on: Wednesday 3rd of March 2021 02:51:13 PM