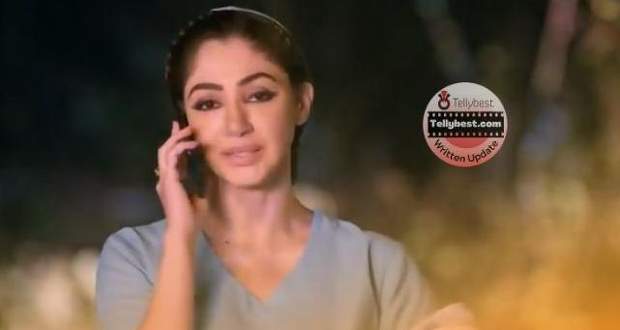 Today's Kumkum Bhagya 20th January 2023 episode starts with Alia panicking after seeing the police catching all her men and asking everyone to stay away from her.

Ranbir, Prachi, and the other family members surround Alia and ask her to return Panchi to them, but Alia warns everyone to stay away.

As Alia continues to step back in fear of seeing everyone coming toward her, her foot imbalances after placing it on a rock and Panchi slips away from Alia’s hand and falls into the river.

Ranbir and Prachi scream in terror as they witness Panchi drowning in the river and disappearing in nowhere.

Prachi faints in Ranbir’s arms while Ranbir also finds it hard to control himself seeing her daughter die with his own eyes.

After the Kohli family returns home, Rhea leaves to join the rescue team of the police while Ranbir also says that he will go.

All the other members ask Ranbir to stay with Prachi while Prachi wakes up and starts panicking to find Panchi.

Ranbir asks Prachi to calm down a bit to which Prachi asks Ranbir how he can ask her to relax when her Panchi is not with her.

As Ranbir tries to knock some rationality in Prachi, Prachi says that he should be ashamed of himself as a father.

Prachi says that it is Ranbir’s fault that they lost Panchi because he could not protect his daughter as a father.

Ranbir says he has enough of Prachi blaming him and says that Prachi is the mother who killed her daughter because of her over-smartness.

Prachi makes a shocked face while Ranbir blames her for sending Alia to jail due to which she killed their daughter.

Prachi says that she went to save her Panchi but Ranbir ruined everything by coming there which leaves Ranbir in cracks.

Ranbir goes mad hearing that he is responsible for Panchi’s death and says that Prachi is the one who killed Panchi.

As Prachi says that Ranbir is the sole reason for Panchi’s death, Pallavi stops her and says that she cannot blame her son like that.

Before Prachi can say anything more, Ranbir says that he has come to hate her from his core and wants her to leave the house immediately.

Ranbir says he is disgusted looking at Prachi and has realized that Prachi always ruined his happiness since she entered his life.

Prachi leaves the house with Ranbir crying his heart out as he has lost everything.

Prachi goes to the spot where Panchi fell down and falls into the river after getting hit by a truck.

Ranbir gets devastated on hearing that Prachi has fallen into the river as Panchi and runs to save her.

On his way, Ranbir gets into an accident as his car crashes into a tree leaving Ranbir unconscious in an injured state.

Rhea comes to Ranbir’s rescue and takes him to the hospital after which he wakes up after 2 days.

Pallavi tells Ranbir that Prachi and Panchi are no longer among them as they found no one in the river for the last two days.

Ranbir tries to get out of bed to bring Prachi and Panchi back but faints again due to his head injury.

A leap of 6 years takes place and Ranbir is shown buying clothes and jewelry for his daughter of 6 years age.

At the same time, a girl comes to Prachi and says that her “bhauji” has gone to bring clothes and jewelry for her but Prachi jokes that her dad’s choice is not good.

Prachi dresses up her daughter herself and says that her dad will love to see her dolled up like that.

Meanwhile, Ranbir buys red bangles and says that they will look very good on his daughter once she wears them.